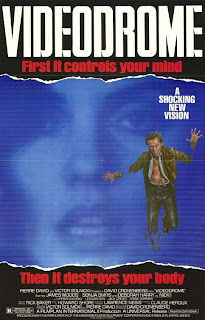 Long live the new flesh!! (Cliché opener but I couldn’t resist Videodrome fans!!) Videodrome (1983) is a disturbing film by the one and only David Cronenberg. In it, he focuses his obsessions on how technology and entertainment shape one’s body. The behavioral impact of television, television as a platform of political indoctrination, and how technology may shape biological development are all concepts addressed by the film.

Videodrome takes place in Cronenberg’s native Toronto and follow the exploits of Max Renn (played by James Woods), as he attempts to find new violent and/or sexual (if you can combine the two the better in Renn’s mind!) programming for the disreputable niche market he is cultivating on Civic TV -- Cable Cannel 83. While courting various porno distributors, Renn also uses pirate satellite to tune into international and underground feeds in his search to find “the next thing.” Needless to say he finds this "next thing" on one of the pirate feeds, a program called Videodrome, which is a series of snuff film that carries a signal that addicts the viewer to the program and causes cancer.

The films’ look itself it standard Cronenberg, always shot in a “flat” style to add a sense of reality to this bizarre tale. The more visually interesting shots he employs are in the surreal hallucinations Renn experiences as a result of viewing Videodrome. They are highly symbolic, such as scenes of a Renn having an evening with psychologist he met during a television roundtable lit by television, a character no one has seen except on video conferences, and Renn performing S&M whipping to a television set. Yes this is freaky territory and decidedly not for the kids (*sigh* to the parents who couldn’t tell by now….) but well worth it for the adventurous or intellectual viewer.

The body and makeup effects are also absolutely amazing. While now CGI would undoubtedly make these effects a few mouse clicks away (okay a lot) there is a certain visceralness that the makeup effects provide that only the best of CGI can approach. Yes some shots do look a tad “dated” (the camera frames solely on a obviously prosthetic hand as it morphs) but these shots still look gross and remarkable in a way CGI often doesn’t. Some of the effects are almost seamless and still look convincing today such as the Batamax player Renn grows which is designed to resemble female anatomy...(!) Regardless of whether the effects hold up, all of the effects shots technical marvels. Among my favorite “trick shots” involves the infamous shot of Renn putting his head into a TV set (which is “on” as he does so) and said TV set later morphing a gun out of it’s tube to shoot him. And unlike many SFX riddled tales, CGI or “traditional,” everything is done in service to the story.

A must see for folks who like to think at the movies! David Cronenberg has also directed the recent favorites of A History of Violence and Eastern Promises which see him move away from explicit horror and SF tropes but keep his obsessions with the body well intact.