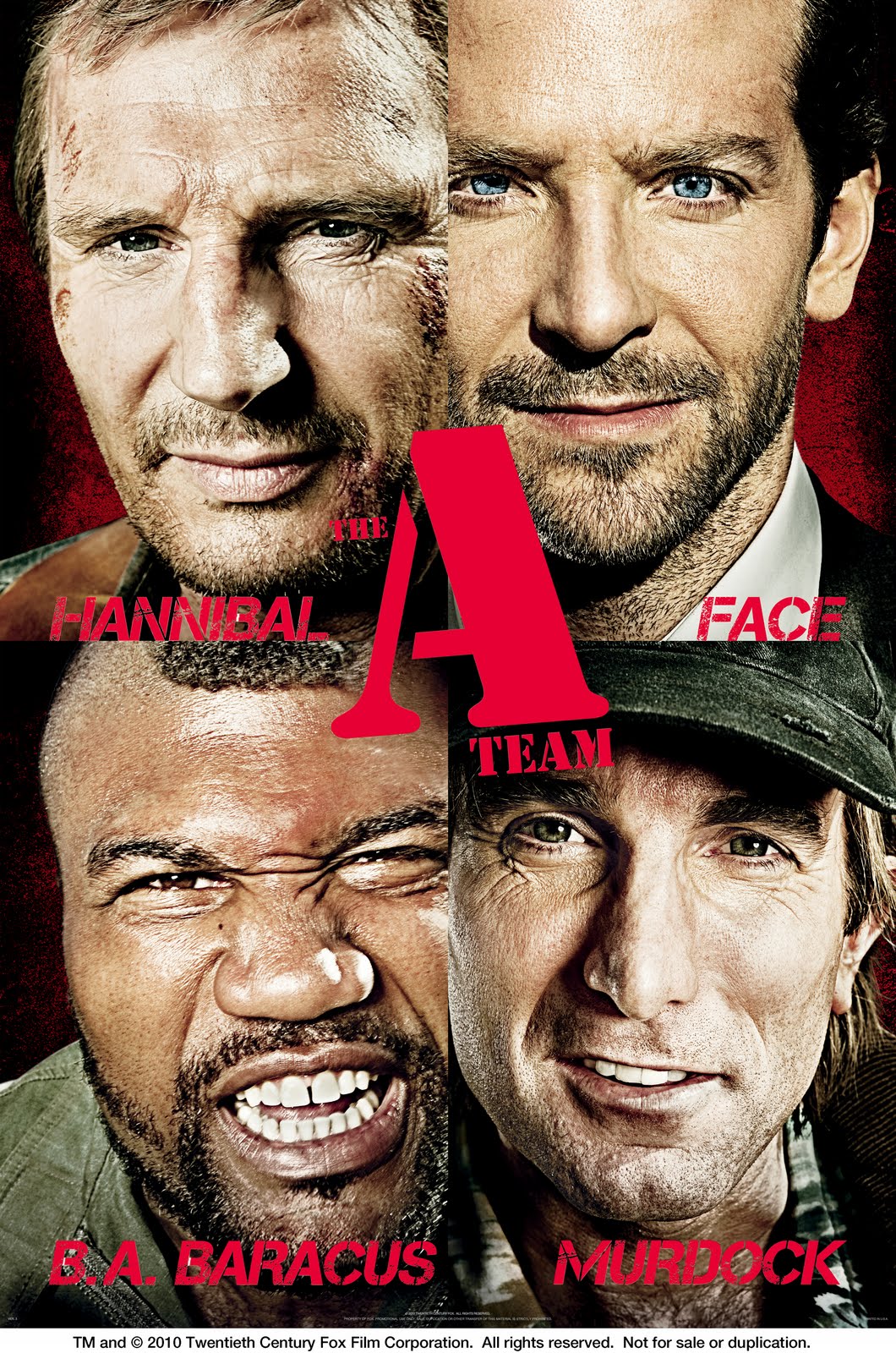 The A-Team, directed by Joe Carnahan (Narc), explodes on the screen with such ferocity in its editing, I felt wary driving home. It seemed I saw swish pans, tilts and other rapid motions upon blinking.

The A-Team film is an origin story, telling how the titular team gets framed for “Crimes They Did Not Commit.” Meeting up seemingly by chance while taking out a Mexican warlord of some sort (it’s not explained who this guy is and if it was, I must have blinked during that jump cut). After this south of the border intro, the team spends the next 8 years working together, without aging a day, or getting any scars. Now in Iraq, they attempt to stop the movement of U.S. Mint Printing Plates by Saddam loyalists. Upon bringing them back to the U.S. HQ, they are instead charged with stealing them in a set up by Mercenaries and possibly other mysterious forces. The plot is surprisingly complex, and sides get switched more often than members of Van Halen. Any semblance of plot exists of course, for the action.  Carnahan amps up the Bourne-style shaky cam almost to the point of abstraction in The A-Team. There were times where someone was fighting on a truck, then all the sudden that person was driving the truck. We get flashes of a gun then someone’s face so we know that person is in danger, but don't always see the whole situation. Set-up, swish, resolution.  Repeat for the duration. Plot point doesn’t make sense, or a stunt seemed too ridiculous (Helicopters fly upside down)? It doesn’t matter, we’re already on to the next set-piece. Through the film the A-Team attempts to clear their names.

I told myself, I wanted to judge this movie on its own terms, not in comparison to the original TV series, but the film can’t help but be entrenched in in-jokes. John “Hannibal” Smith (Liam Neeson, Taken) likes to say phrases with “plan” in them a lot since it was the original character's catchphrase. Templeton “Faceman” Peck (Bradley Cooper, The Hangover) goes from a suave ladies-man in the original, to a mega-bro whose shirts are seemingly absent without leave here. B.A. Bracus (Rampage Jackson) has tattoos that say “Pity” and “Fool” and has some throw away spirituality on not killing people in reference to Mr. T, his predecessor. H.M. Murdock (Sharlto Copley, District 9) goes from goofball sidekick to absolutely insane when convenient to the script and/or a joke is needed, although this admittedly is pretty close to the original series.  Also, the team likes to hoot-and-holler a lot when things blow up – it’s almost like a laugh track that tells us to when something exciting is happening. Jessica Biel (Total Recall) plays Sosa who is an amalgam of all of the MPs that have chased the A-Team in the series, amped up by two since she also plays a former flame of Face. Patrick Wilson (Watchmen) also stars as a mysterious agent with Brian Bloom as the leader of the mercenary clan.  Any other characteristics of these people really don’t matter. It’s on to the next sequence!

I liked this movie better than I thought I would, although I did not have high expectations. It’s hard to put 80s TV action heroes, who are known for their pulp plots and cheesy fun, in a modern action movie where seriousness is expected. As a result, there is a little schizophrenia between stunts that are over-the-top even for the 80s show (flying a tank) while still maintaining a straight face. Again, the film moves so fast, you don’t even get to think about it for the most part, which is probably why it is much more fun than it should be.

All but purist fans of the series and action junkies will enjoy the film.  The film tows the line of placating the old fans while attracting new, although the TV series was still a lot more fun. Just as good as the similar movie The Losers and containing less of that film's sadistic tendencies, so it's worth checking out if you liked that film as well.