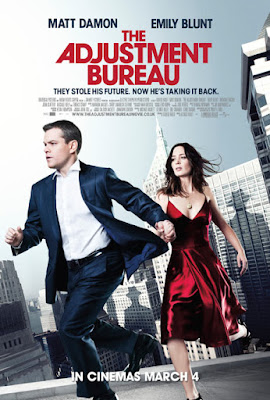 The Adjustment Bureau needed something to make it a better movie.  It has interesting ideas culled from author Phillip K. Dick, but doesn’t have the same resonance of his better adaptations (Blade Runner, A Scanner Darkly).  It’s clear that the film was either dumbed down to appeal to a wider audience or lazily slapped together from a few of Dick’s ideas.

It’s hard to go into detail about the film’s story since little is revealed until about the halfway mark.  Suffice to say, the shadowy Adjustment Bureau is “up to stuff” to keep the world functioning according to their Plan.  Political candidate David Norris (Matt Damon, Syriana) meets Elise (Emily Blunt, The Devil Wears Prada) in a chance encounter and she inspires him to give the speech of a life time.  Due to a sleeping agent’s negligence, David meets Elise a second time and decides that she is his soul mate.  This is no good because the Bureau had them scheduled to never meet again and they must now keep soul mates apart.

Where did the film go wrong?  It could be that Damon and Blunt don’t have chemistry.  It could be that the film never takes a stance on the Adjustment Bureau.  Are they benevolent or malevolent?  Do they lobotomize humans because they love them?   I have no idea, and I’m fairly certain the film doesn’t either.  Above all, The Adjustment Bureau isn’t a good film because, despite paying lip service to ideas like free will and fate, it finishes with a feel-good ending that negates most of the debate around those ideas.

I liked the movie well enough while watching it.  It moved at a quick pace and was otherwise inoffensive.  However, upon trying to explain the film’s plot and message in the review I realized how silly the film is and how little the film has to say about anything.

I am reminded of the film Dark City.  Like The Adjustment Bureau, the characters of Dark City are being controlled by mysterious noir figures.  In Dark City, a particular character goes insane upon the realization that his world is a sham, drawing spirals as a result of his ensuing insanity.  After two days of writing this review trying to explain the Adjustment Bureau’s motives, I relate.  If you can handle the hard R rating, go rent Dark City instead.

The Adjustment Bureau was written and directed by George Nolfi and based on a short story by Philip K. Dick.  Anthony Mackie (8 Mile, The Hurt Locker) and Terrance Stamp (Superman II) also star.