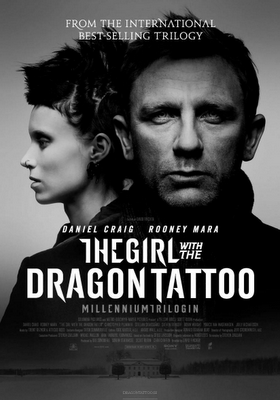 Mikael Blomkvist (Daniel Craig, The Jacket) is a disgraced journalist who, when offered by aging industrialist Henrik Vanger (Christopher Plummer, Priest), sees a 40 year old cold case as the opportunity to redeem himself, or at the very least as an escape from the fallout after a recent libel case.  The fact that Vanger offers substantial dirt on the rival during said libel case helps Blomkvist make up his mind.  The cold case is a very personal one to Vanger.  Not only has his niece been missing for the last 40 years but he suspects that one of his family members, all who live on the same island, murdered her.  Deeply dysfunctional in a way that only the moneyed can be, half of the Vanger family isn’t talking to the other half at any given time, and it is somewhat telling that a former Nazi may indeed be the most honest member of the dynasty.  As Blomkvist becomes deeper involved in the mystery, he hires hacker extraordinaire Lisbeth Salander (Rooney Mara, The Social Network) to assist in the increasingly suspicious circumstances of not only the niece’s disappearance, but also of other women throughout Sweden.

TGWTDT sports some of the most impeccable visual direction of any film released in 2011, courtesy of David Fincher.  Camera movements have been stabilized to the nth degree, and color correction is impeccable.  Perhaps the film’s lurid subject matter could have benefited from a level of grittiness but on a technical level, this is as close to visual perfection as the movies can really get.

Steven Zaillian’s (Moneyball) script, however, could have used a similar level of polish.  To some extent the narrative foibles are apparently a result of the nature of the source material.  Stieg Larsson’s original novel is, by all accounts, a tad wonky, and since the film utilizes a five-act structure to keep most of the book’s information intact, the film has a feeling of being “off” somehow.  The two leads do not meet until just over an hour into the film and the film continues for a half hour or so where a standard 3 act film “normally” would have ended.  This is a bold choice, but not necessarily a “bad” one.

More problematic, however, is that despite Lisbeth Salander’s reputation as an iconic character, she is reduced to what is essentially a sidekick role.  Blomkvist actually has a more defined character arc in the traditional sense since the investigation of the Vanger disappearance offers him the chance for redemption.  Salander doesn’t necessarily have anything to gain or lose by helping him. Sure, as a damaged woman, she could be looking to avenge woman beaters of all stripes as the book’s original title Men Who Hate Women might imply, but these themes aren’t explored as well as they might be.  Even when Lisbeth exacts revenge on a tormentor early in the film, her motivations are unclear.  Does she exact retribution out of a sense of justice or revenge?  Is she relived that the villain is cut down?  Is she disturbed that she has such a capacity for revenge?  Even the aforementioned “Men Who Hate Women” aren’t fully explored.  They’re certainly present in spades, but it’s less apparent exactly why they hate women.  Biblical misogyny and anti-Semitism are suggested for one antagonist and perhaps it is a crime of convenience for another.  A third main antagonist, however, remains somewhat of an enigma even after a mustache twirling monolog.  Viewers should be aware that there are several scenes of extreme brutality that border on torture porn in both content and tone.  These scenes are especially jarring considering the relatively detached storytelling the rest of the film exhibits. 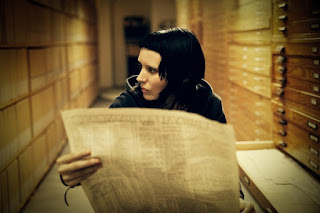 TGWTDT works as a “whodunit,” but doesn’t develop its characters or themes as well as it might have done.  Director David Fincher’s obsessions on display here, but he did biblical serial killings better in Se7en and explored old money vs. new money more thoroughly in The Social Network.  TGWTDT is not a bad film by any stretch of the imagination, but it doesn’t really have anything new to say.