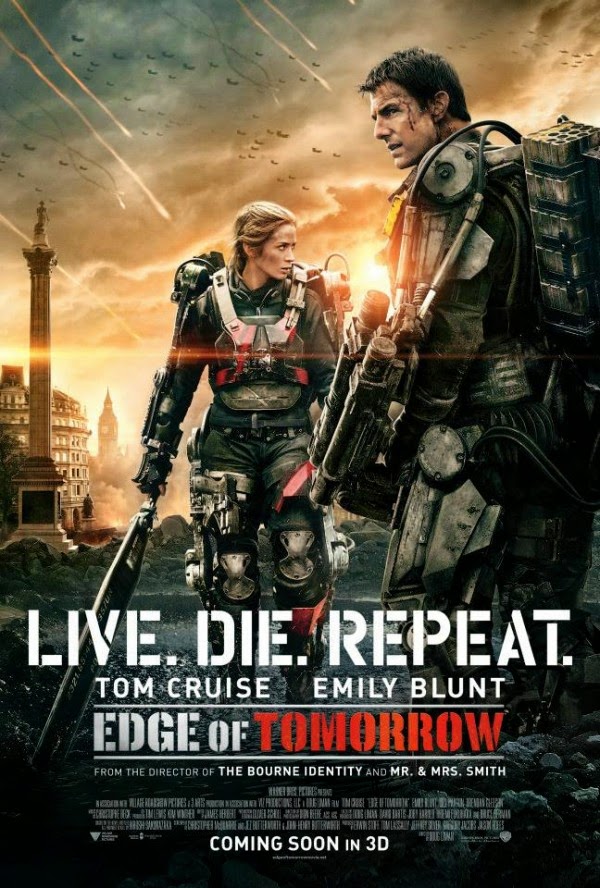 Edge of Tomorrow is a fantastic, near perfect sci-fi action movie. It's the pinnacle of what these types of movies have to offer. Excitement, visceral thrills and superb special effects. It has the visual scope of war film epics, and despite the film's dark undertones, there is certain lightness to the material, much like an 80s or 90s action film. The flaws that prevent Edge of Tomorrow from greatness, the things than hold many contemporary megabudget films back. It doesn't fully explore its character and social implications, it glosses over plotholes for the sake of expedience, and it's hard to shake the feeling it's all been done before.

Tom Cruise stars as Major Bill Cage, a longtime spokesperson for the US Military. Cage gets demoted to private and transfered to the front lines in a war against alien invaders. Never facing combat in his life, Cage quickly finds himself overwhelmed by the aliens, known as Mimics. The mimics are nasty creatures, equipped with spiked appendages and superspeed. After getting goo'd by a rare blue Mimic, Cage finds himself waking up the day before battle. A feat he repeats again and again, each time he dies.

The once cowardly Bill Cage soon becomes battle hardened, reliving the same battle for weeks, months, or maybe even years. In attempts to drive the alien invasion back for good, he eventually seeks out the advice of Earth's most legendary warrior Rita Vrataski, aka the Full Metal Bitch (Emily Blunt). Bill Paxton, also stars and serves as comic relief.

Good special effects are a dime a dozen in today's movie marketplace, but
Edge's truly are phenomenal. Seemingly a blend of practical and digital effects, the film creates a convincing look. The implications of being caught in a time loop are unsettling, made further grim as suicide is one of the ways to reset the loop. The film glosses over these implications, for better or worse, likely to keep it's PG-13 rating and to stay mass audience friendly. There are some character moments, but as for themes? Really, "don't be a an army deserter" is as deep as it gets.

Since it does so many things right, the internet has been abuzz about Edge of Tomorrow, citing as a great example of an "original" tentpole release. And while it's a great action film, original it ain't. The film borrows from other films like Aliens and Groundhog Day, video games like Halo and Gears of War, and is based on a novel which has also received a manga adaptation. What people likely mean when they call Edge of Tomorrow "original" is that it isn't a sequel, and it isn't (strictly speaking) a remake or reboot.

Edge of Tomorrow is as fine as big budget action films come. If only other films hadn't gone down that timeloop before, and it had the conviction to go a little deeper in it's implications.

Edge of Tomorrow was directed by Doug Liman, and written by Christopher McQuarrie, Jez Butterworth and John-Henry Butterworth. Source material comes from All You Need is Kill by Hiroshi Sakurazaka.