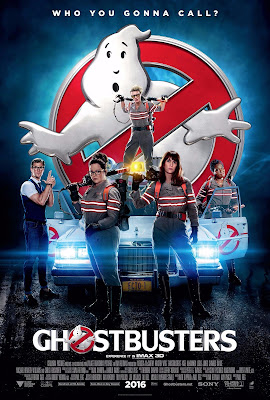 Who would have figured that a new Ghostbusters movie would become a flash point in ongoing culture wars? Not only do some fans guard the original films as if they were sacred texts, there was also an outcry in some circles over the film's casting that was nothing more than sexist. You see, the Ghostbusters have bustlines this time. For all the tempests in the tea kettles, there remains one question: is the movie any good?

A socially inept physics professor, named Erin Gilbert and played by Kristen Wiig, is up for tenure when a book she published years ago appears online. The book is a foray into the pseudoscience ghost hunting that could tank her chances of tenure. Her estranged co-writer Abby Yates, played by Melissa McCarthy, has restarted their old research and republished the tome online. Just as Erin finds Abby to ask her to take down the book, reports of increased ghost sightings appear across New York City. With some gear created by the wonderfully insane Jillian Holtzman, played by Kate McKinnon, the newly formed "Ghostbusters" join Patty Tolan, played by Leslie Jones, to search for the paranormal in the subway and across the city. It seems that someone has been trying to conjure increased ghost activity...

Overall the new Ghostbusters team works well together. Kate McKinnon's Holtzmann is a scene stealer, whose bizzaro behavior is part of a brilliant performance. As an example - at one point she perfectly lip syncs a song, only to misidentify what artist the song is by. Wiig and Jones are also very funny, bringing both nebbish and blue-collar sensibilities to the ensemble. Naturally, the uptight character played by Wiig catches most of the ghost slime onto her clothing - ectoplasm in the film's ghost vernacular. While McCarthy gets a few laughs, she doesn't quite pull of group's lead scientist, and her sitcom timing is occasionally grating. Rounding out the team is the hunky but dumber than a box of rocks secretary, played by Chris Hemsworth.

This film is truly a remake, and this film totally resets the lore of the Ghostbusters universe. Even so, there are plenty of nods to the originals, which made this viewer wish to watch those. Many of the living cast members from the 1984 original appear here, but in brand new roles.

The plot is familiar, but there are all new supernatural villains. The ghost special effects are amazing. They are just the right blend of spooky and cartoonish. It's the type of production the creators of the original could have only imagined 30 odd years ago. A gaggle of possessed parade balloons and fan favorite ghost Slimer are standouts.

There are some wonderfully brilliant one liners in this film that will get more laughs upon each viewing. There are also some incredibly loud duds, particularly in the first half of the film, that land like a bomb.

Is it the best remake ever? No. It's miles ahead of the Ninja Turtles films that arrived dead on arrival to theaters last month though. Supposedly Ghostbusters 2016 is the first of a series of interconnected Ghostbuster films, with each film following a different team of 'Busters . If next films are as solid as this one, bring them on (and bring one of the Ghostbusters teams to Detroit!).

Ghostbusters was directed by Paul Feig, who co-wrote the film with Katie Dippold.