The world of 2029 feels vaguely pre-apocalyptic. While there may be parties in the back of Logan's limo, the outside world teems with heavy police presence. All of the mutants Wolverine and the audience have grown to love have been "eliminated" from the world, and it seems whatever allowed them to exist in the first place has been wiped from the human genome. God only knows in which timeline this film exists in, but it ain't a good one.

Wolverine's goal, like so many world-weary men in cinema, is to raise enough cash to escape his current existence. Specifically, he hopes to raise enough dough to take him and an Alzheimer's ridden Professor X far away from anything resembling society. To make matters worse, Wolverine's own powers seem to be slowly diminishing as well. His 150-odd year existence seems to be nearing its end as his regenerating powers don't seem to regenerate anymore.

In true genre form, a stranger appears asking for Wolverine's help. The stranger asks him to take a mute girl to the Dakotas based on something the stranger read in a comic book. The job pays enough to escape town, but Wolverine soon finds himself chased by a para-military organization led by Boyd Holbrook's charismatic bounty hunter.

Drunken, moody loners are a dime a dozen in action cinema. Actors seeking to win awards by playing characters beset by afflictions are so common that cheap jokes are made about them. And despite its assembly of action, sci-fi and western tropes, Logan creates genuine pathos with its broken down but hopeful characters. While it is not necessary to have seen the previous films to enjoy this X-Men entry, Wolverine's sadness has accumulated across a half-dozen films made over the span of nearly 20 years. Everything that takes place this film makes it seem as if it will be Wolverine's last. He may not beg for forgiveness in a chapel a la Harvey Kitel's Bad Lieutenant, but Wolverine's actions, and fate itself, push him slowly toward a path to redemption. No one ever considered X- Men Origins: Wolverine to be a masterpiece, but that 2009 film now takes on a new meaning with it's comparative hope and optimism of "young" Logan. 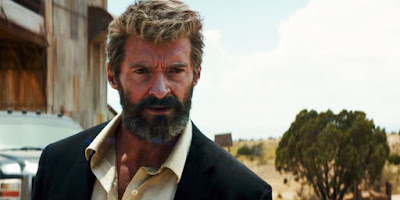 There have been other attempts at "mature" superhero movies, and this film sprints past most of them by a country mile. James Mangold directs the feature, and he draws upon his experience making not only 2013's The Wolverine, but also the Johnny Cash biopic Walk the Line and the 3:10 to Yuma remake. Joining Wolverine, X-Men stalwart Patrick Stewart stars as Professor X and Dafne Keen stars as the young girl. Despite featuring a child this is NOT a kid's movie. The violence is ultra, and the language is harsh.

If last summer's Captain America: Civil War was the pinnacle of a crowd-pleasing superhero blockbusters, Logan is the art film that may finally legitimize superhero genre. This is perhaps the most thematically rich superhero film yet made. Don't take the kids. Wear sunglasses so no one can see you crying.