Ghost in the Shell is the greatest science fiction movie from the 90s that wasn't made in the 90s. Based on the 1989 Japanese comic book and 1995 animated film of the same name, Ghost in the Shell depicts "Major" Mira Killian as she adjusts to life as a cyborg. Her brain was rescued from a victim of a terrorist attack, and her new body is part-human, part-machine and all secret agent. The deal requires that Major work with the Section 9 spy agency as "repayment" for transcendence. As the film begins Section 9 tasks her with investigating the murders of scientists working for the Hanka company. Given that Hanka created Major's body, her attention is rapt. 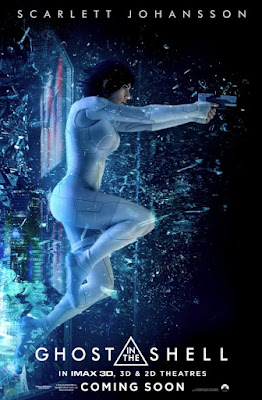 Stylistically and thematically part of the "cyberpunk" subgenre of science fiction, this film looks like an amalgamation of every 1990s video game, comic book and novel. Neon lights every street. Cables connect to bulky cyborg gear. And of course, millennial conspiracy theories run amock. Real life, of course, turned out to be much more mundane. The doomsday predictions (thankfully) didn't come to pass, and Bluetooth lead to far fewer cables. Even if cyberpunk is now retro-futuristic in the same way that atomic age pulp fiction is, Ghost in the Shell is a gorgeous film.

If the punk visuals are aces, the neon noir mystery could have used a punch up. Even the twist at the end was unsurprising for anyone familiar with cyberpunk tropes. Though inquiring about the mind-body duality is one of the oldest features of humankind, the film retreads the same questions probed in RoboCop and Blade Runner.  What makes a human "human" in a cyber world? Such a profound concept is treated in a fairly shallow way here. Though Mira claims her humanity by the end of the film, it doesn't entirely feel earned. As the comic book blockbuster settles into maturity as an art form, the divide between popcorn fun and serious thematic considerations are something filmmakers and moviegoers alike will have to grapple with. This film seems torn between the two modes of thinking.

It was great to see a multi-ethnic and multi-gendered team at Section 9, where Major works. As much star-power that Scarlett Johansson packs, observers are not exactly wrong in suggesting that a Japanese lead could have played the role. Takeshi Kitano takes the stage the primary Asian character, and he does an excellent job portraying Section 9's chief. One of his scenes late in the movie is one of the best action scenes in the film. Action sequences are staged to be kinetic, and they are a lot of fun to watch against the neon cityscape. Major's Barbie doll nudity keeps things PG-13 (and just a little strange), though savings on women's athletic gear probably becomes negated for a person whose body that costs millions of dollars.

Ultimately the film streamlines and distills what made cyberpunk great. Unfortunately, it doesn't bring much new to our post-cyberpunk world. It's a lot of fun for adherents to the cyberpunk ethos.