The film consists of five segments, each of which take place behind the scenes, before a performance. Between each segment is an era appropriate VHS flashback, setting the segment's thematic arc. The center of each segment is Becky Something, lead singer of Something She and unabashed train wreck. Addicted to drugs, alcohol and fame, Becky is the amalgamation of countless Behind the Music washouts. Her bandmates are exasperated as she fails to show up to the studio sober; her manager is driven to the brink of bankruptcy by breaches of contract; and family members have to cut ties after years of abuse. Spending most of the film's runtime as a danger to herself and others, Becky is more of a destructive force than a creative one. This isn't a rise and fall story; it's a fall and fall further story.

Becky's presence consumes everyone around her, and the design of Her Smell never leaves the audience out of this discomfort. The movie taxes the audience in many of the same ways that Becky taxes her bandmates. Neither the camera nor the soundtrack remain still, filled with discordant sounds and out of focus framing. The grind of Becky's insanity combined with a five act story structure create an anxiety laden viewing experience. While the film is largely a serious affair, there is also a modicum of humor to be found. One line barbs are fired between bandmates, and at one point in time, Becky's documentary crew consists of community college students.


Though the subject matter and title imply a sleaze picture, the film's interests aren't purulent. At the center of the story is a damaged woman looking for a way hide from the world and hide from herself. Becky is as much as stage persona is it is a way for Rebecca to avoid self-reflection. Whatever damage Becky suffered isn't explained and is left to the imagination. In some ways, it doesn't matter. Her damaged psyche is both a MacGuffin for her bandmates and a Rosebud for the audience.

Elisabeth Moss' performance as lead singer Becky Something recalls a feral creature. At times she almost seems possessed. Had her loved ones called an exorcist, it would have felt story appropriate. Director Alex Ross Perry surrounds Moss with an excellent array of supporting players, including
Agyness Deyn, Gayle Rankin and Eric Stoltz.

Her Smell an exceedingly well crafted film that commits to its concept. Though the film breaks no new ground in the degenerate rock star genre, the ending surprises, the design is fantastic and the performances are first rate. 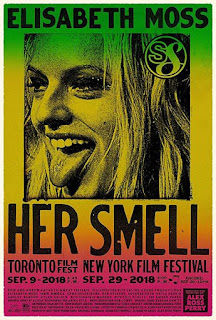