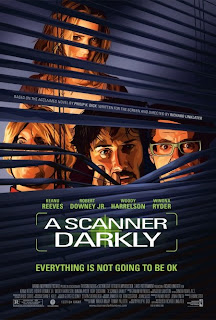 What does a scanner see? That is the titular question posited by Richard Linklater’s 2006 film A Scanner Darkly based on the Phillip K. Dick novel of the same name. Scanners, naturally, are government agents who review the camera footage from 1000s of cameras placed blanketing this future society, observing for crimes.

It’s one of the better Sci-Fi films of the 00s, but it’s still grounded in the current era enough for people who don’t like the genre. Like the best works of the genre, it does not focus on SHOOTIN LAZERZ but on ideas. Like all of Phillip K. Dick’s work, the ideas at hand are questions of identity. With the background of being constantly under surveillance, a drugged out undercover police officer by the name of Bob Arctor (Keanu Reeves), who in true Dickian fashon, winds up being the scanner assigned to monitor Bob Arctor for use of a super drug called Substance D (his identity as a scanner is not known by the force in order to maintain his cover.) This is the best set up I can give you without letting you unravel the story for yourself. Suffice to say, even the viewer is left wondering who is who. It’s also an excellent drama, and the focus is much more on the characters than one would expect with the “Sci-Fluff” largely produced today.

It’s obviously, a visual striking film using a technique called “rotoscoping.” Rotoscoping is a process by which artists take a film and color over the image to create a sort of Cel Shaded/ Cartoon look. Not only does the rotoscoping look “cool,” it adds a visual metaphor for the disconnect and paranoia the characters feel . Clearly all the actors were filmed, but then we aren’t really watching them, we’re watching a representation of them trough the rotoscoping technique. This is especially eerie when the artists leave a few frames slightly translucent, either by design or by accident, where we can almost see “the real world” and not the cartoon-like façade. What is there and what is not? What is real and what is not? It’s a brilliant move by Linklater to use this technique for this film, which also adds sort a bright, cheery feel for what is essentially a very dark film.

p.s. Watch for cameos of (deceased) Phillip K. Dick in a “scramble suit” and Alex Jones as a street prophet.