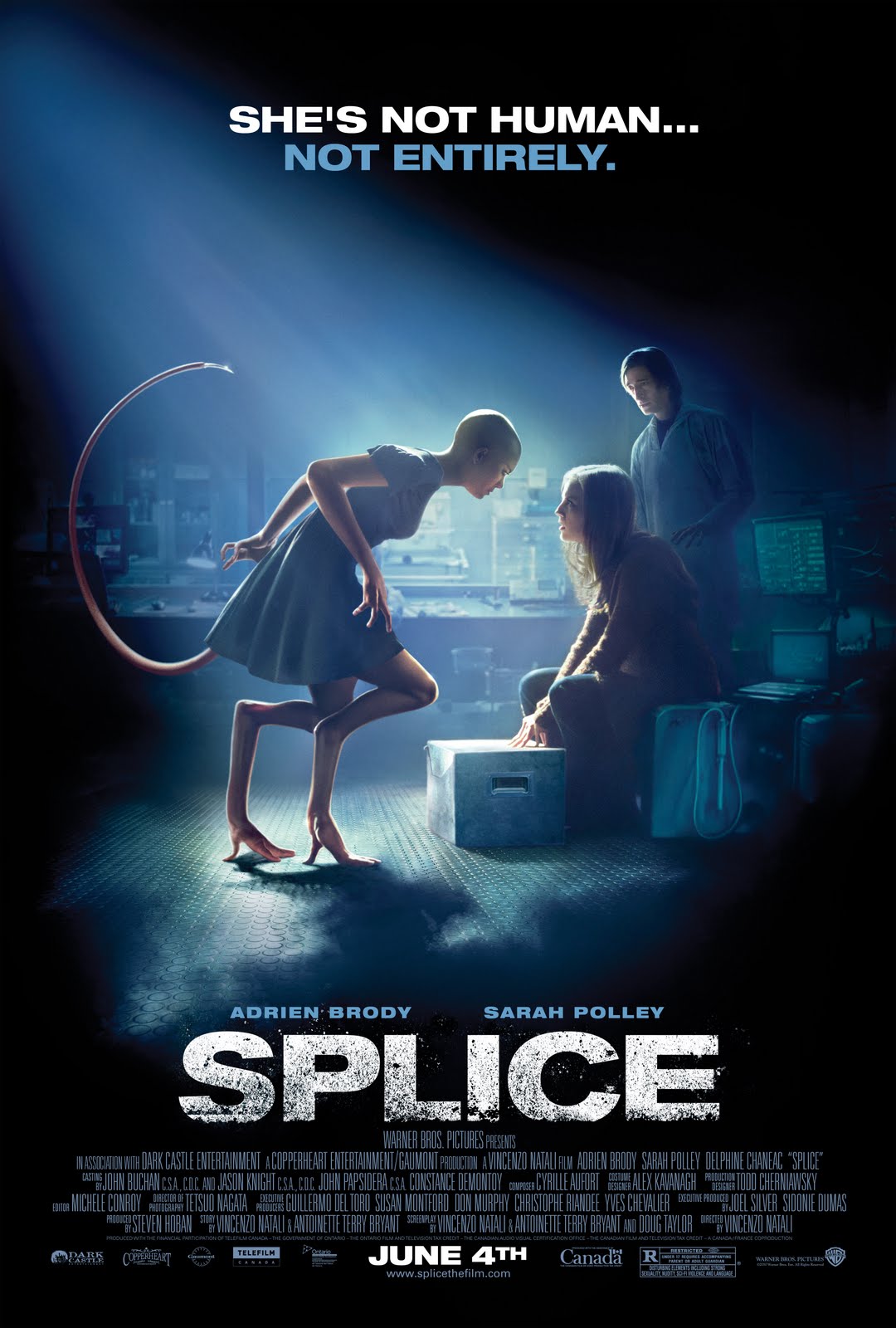 Splice is one of the best movies I have seen this year.  I once read someone review a movie as “just like a Martin Scorsese film” as the best praise one could give. This movie is just like if David Cronenberg made Gattaca. Mixed with The Fly. Of course Cronenberg couldn’t have made this film, the mutations occur on objects outside the protagonist’s body and didn’t carry his signature melancholy detachment, but it has his elements of his off-kilter sensibility.

Splice is about two bioengineers, Clive and Elsa, who work at the NERD lab (*sigh*). They *splice* genes (get it?) to create mutant animals. Based on the bad puns, I was starting to get worried for the film. I then began to worry that the film was going to turn into a tortured Pandora’s Box metaphor, as Elsa does much of the pushing to create a new biological organism after NERD has reached the limit of what they can create legally and morally. However, once she finally crosses over the unknown territory of creating a creature with human DNA, the film becomes a highly complex examination of what might happen if we were to create a new completely new being with human genes. The film explores if it would be moral to terminate the creature, how much you can treat it as human, and even if it would be possible for the new being to mate with people. Needless to say this is a highly disturbing film replete with alien-like pregnancies.

Particularly interesting to me was the character development. As mentioned above, I was worried about this film becoming a Pandora’s Box metaphor with the Elsa being an unreasonable Pandora, but the roles for her and Clive become eventually equally reprehensible. Disturbed family histories may also play a role in some behavior on the characters, and begin to repeat themselves on the new creature, as maternal and paternal roles are examined as well. The first act of the film follows the creation of the creature in secret, the second the “grown up” creature and it’s adaption with its parents/researchers and finally… well I don’t want to ruin it.

The film mostly avoids horror clichés, with a few bits that veer it into that area (Don’t drop the flashlight!  Don’t go in that hall alone!).  This film is not nearly as “horror” as some of the trailers have suggested.  It is, however, pure science fiction, dealing with the moral conundrums brought about science (even if the actual hard science processes of creating this creature are somewhat glossed over.)

I can’t recommend this film enough to audiences who crave intelligent sci-fi. For general audiences there is also much to enjoy, provided you have a strong constitution. While the film generally does not veer into exploitation, the film is highly disturbing. Splice was directed by Vincenzo Natali who also co-wrote the film with Antoinette Terry Bryant and Doug Taylor. Splice stars Sarah Polley as Elsa and Adrien Brody as Clive.