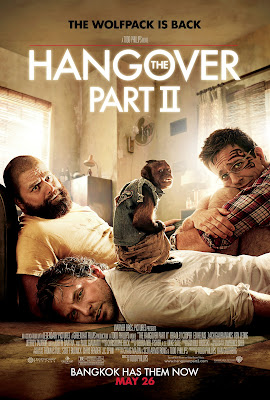 The Hangover 2, or more properly the faux serious title The Hangover Part II, is absurd, over-the-top, unbelievable, lowbrow and most importantly funny.  The film stars Bradley Cooper (The A-Team), Justin Barta, Ed Helms, and Zach Galifanakis (Dinner for Schmucks), reprising their roles of Phil, Doug, Stu, and Alan respectively - aka the Wolfpack.

Two years after their last hangover

, Stu is getting married to Laura (Jamie Chung), after apparently dumping his Vegas bride from the first film.  Laura wishes to have the wedding in her parent's native country of Thailand and thus gives the film's location.  That's right, she exists as a plot device.  It's guys night out, "no gurlz allowd."

Despite Stu's desire to not overdo it (he originally plans a bachelor "brunch" at a pancake house), the Pack winds up hungover in Bangkok with no memory of the previous night.  Much like the film's predecessor, the Pack then spends the remainder of the movie retracing their steps to find a lost buddy, this time Stu's soon to be brother-in-law Teddy (Mason Lee).

The film mirrors the first in nearly every respect, down to getting involved in one of Asian gangster Leslie Chow's (Ken Joeng) schemes.  Celebrity Cameos appear.  Wildly unrealistic antics are recounted.  Alan does awkward things and spouts pop culture references that frequently double as product placement.  Gross out gags appear abound.  In fact, this film decides to ratchet up the gross out factor to include sex acts by a monkey and a brothel filled with transsexual hookers.  One can only imagine how far director Todd Phillips and Co. will take The Hangover Part III: The Death of Stuart Price.

The film is competently made, a features clean editing, a great soundtrack and beautiful cinematography, even as they shoot in the dumpiest parts of Bangkok.  The film features numerous time lase sequences which are quite striking and leave one to wonder what the film would be like if the same level of care went into the copy and pasted script

The film is a tad overlong.  The jokes are mostly a hit, though they do on occasion take things too far.  Any given audience member will probably cringe at a few of the one-liners and gags.  That said, most general audiences who would be interested in an R-rated comedy will likely laugh along with the remaining jokes and have a good time.  Unfortunately, the film plays out like the Wolfpack's night: It's fun while it lasts, but it's unlikely audience members will remember the experience long term.