August 09, 2011
The DVD Dump Bin segment is back for its (slightly belated) August entry… is Wet Hot American Summer a good pick for the dog days of summer? 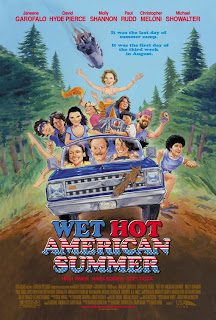 Wet Hot American Summer opens to an excellent montage of camp counselors partying out by a campfire to Jefferson Starship’s “Jane." This brief segment perfectly sets the tone for the rest of the movie, and perhaps encapsulates “youths hanging out in the summer” better than anything that follows. The art of the title sequence may be a lost one, but Wet Hot American Summer's simple but effective opening sequence (along with its clever end credits) make the case that it isn’t quite dead.

The movie that is actually sandwiched between the two credits is a broad parody of the “summer camp” genre. The film follows an ensemble of camp counselors played by Janeane Garofalo, David Hyde Pierce, Michael Ian Black, Molly Shannon, Amy Poehler and the film’s co-writer Michael Showalter as they finish up various camp activities on the last day of camp.

Many summer camp movies feature: a sporting event against a rival camp; some sort of event that threatens to shut the camp down forever; or campers getting lost in the wilderness. Wet Hot American Summer naturally sends up all of these tropes at various points in its run time. At times various times, however, some of the sequences feel like they would be better fit for in sketch comedy TV program rather than scenes in a feature length film.

The film's subtle humor makes jabs that the fact that the actors are at least 10 years too old to play their parts as counselors; the are numerous (allegedly intentional) continuity errors; and the strong possibility that several of the camp’s kids may have gone missing due to incredibly poor supervision.  The film delves heavily into absurdist humor. A short trip to the library devolving into a visit to a crack den. A talking can of vegetables rounds out the cast.

Particularly interesting is to see the cast perform in roles that fall outside of their typecasting, particularly those who would go on to future fame. Paul Rudd is a womanizing jerk here as opposed to his now generic role of “lovable screw up” (Dinner for Schmucks). Bradley Cooper is a gay dance instructor as opposed to his now standard role of “slightly cocky, sometimes likable ladies man” (The Hangover: Part II). Christopher Meloni is an unhinged camp cook as opposed to an unhinged, overprotective cop (Law and Order: SVU.  Okay, so the roles there similar, but this one is comedic).

Frequently amusing, sometimes laugh out loud funny, Wet Hot American Summer might be a good pick for a lazy August evening. Those who are opposed to absurdist humor will likely be lost in the shuffle. For dump bin prices, this is a decent pick, though it won’t convert anyone to its oddball style.

The trouble with recommending a film like this is that fans of its peculiar brand of humor will probably have seen this film a dozen times. Director David Wain and co-writer Michael Showalter cut their teeth on strange shows like The State and Stella, and their fingerprints are all over this film. True to their cult following, there are many retrospective interviews appearing across the web for it's 10 anniversary.

Be sure to stay after the end credits for a brief epilog.