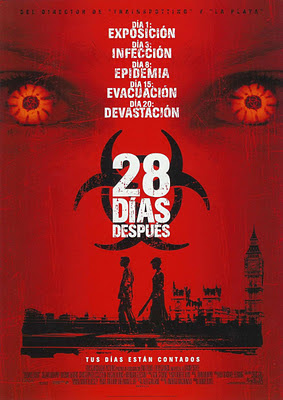 28 Days Later... is a first-rate “zombie” film even if its main villains aren’t technically zombies.  Rather than rising from the dead for unexplained reasons, the hordes here are infected with a “rage” virus that is transmitted to humans from apes when animal rights activists try to liberate a science testing facility.

The first two acts of the film are fairly standard post-apocalyptic, zombie fare.  Jim (Cillian Murphy, Inception) wakes up in a hospital and wanders the now deserted streets of London.  He meets other survivors (Naomie Harris, Brendan Gleeson).  Some of will live, others will not.  The film, however, deviates in the third act, becoming something much more cynical.  The infected cease to become the scariest part of the film upon discovering a stranded unit of British soldiers led by Christopher Eccleston.

The plot isn’t particularly intricate, and longtime genre fans will likely recognize nods to and cribs from other films.  What sets this film apart, perhaps not from masterpieces in the genre but certainly from the cheaper fare, is the pacing and technical precision the film has.  The film expertly juxtaposes quiet moments of dread with sudden action of approaching infected, and just when the survival horror aspects begin to plateau, the film shifts tone for its third act.  Most strikingly, the film isn’t afraid to us silence, a rarity in all mainstream genres modern filmmaking.  The superb use of silence adds dread to the film’s depictions of an abandoned London and John Murphy’s score accentuates moments where needed.  The cinematography is clear (perhaps suffering from a bit of compression on DVD), and doesn’t rely on “shaky cam” to create what passes for tension.

28 Days Later... synthesizes familiar elements into its own style and has become something of a modern horror classic, almost de facto since the majority of highest profile horror films in the 2000s have been remakes.  It’s most famous for two things, the eerie scenes of a desolate London and for popularizing the fast moving infected horde/zombie trope, the latter being the film’s main innovation.  Paranoia about pandemic infection and having a cynical view on human nature in the face of that infection is a subject that covered in many books and films, but director Danny Boyle, writer Alex Garland, and the rest of the cast and crew, all work to create a well crafted, very watchable film.  I did not find the film particularly scary, though it certainly earns its R rating.