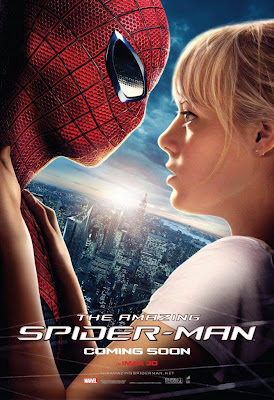 The Amazing Spider-Man is competently made, has a decent story, and some good action sequences.  Why, then, does the film feel like a letdown?  Superhero fatigue.

Even the most ardent Fanboys and Girls must have it to some degree, holding out for that Blue Beetle adaptation while secretly disappointed by the mediocre, similarly plotted superhero films that come out each year.  It's not that The Amazing Spider-Man is a mediocre adaptation though, it's actually quite good.  It just doesn't have a unique hook that allows it to soar over its stiff competition.

Origin stories are especially difficult to differentiate among all the superhero product, since they are all share the same basic story arc.  The main variable of these stories are is whether superpowers will be granted by a freak accident of science or alien technology.  When an origin story is rebooted 10 years after the first film last series, it’s only natural to be skeptical of the new edition.  How 2002’s Spider-Man and 2012’s The Amazing Spider-Man compare will largely depend on personal preferences - they're about equal in terms of production value.  Some things are the same: Uncle Ben is still a kind mentor and Oscorp Industries is still up to no good.  Some things are different: the new Spider-Man played by Andrew Garfield (The Social Network) has much more angst than 2002’s Tobey Maguire, the Lizard is Spider-Man's new challenger, and Mary Jane Watson is jettisoned for Gwen Stacey (Emma Stone, Easy A) as a love interest.  Dozens of other changes are abound, and the tone of this film seems slightly darker than the 2002 adaptation.

The Amazing Spider-Man does a fine enough job with the material at hand.  Spider-Man is still a likeable hero, and Marvel aficionados will find much to like and even love.  Time may very well be kind to this film, once the superhero infoglut is over, but in 2012, it’s simply too much, too soon for anyone not overly drawn into the Marvel Universe.