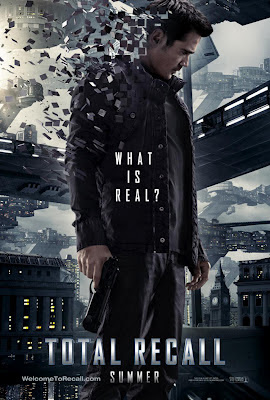 See you at the party Richter!

2012’s Total Recall is the type of remake that looks great on paper, but adds up to be less than satisfying for fans of the original.  Like 2011’s The Thing, it’s in a subgroup of remakes/reboots/re-whatevers that try to deftly balance studio expectations (make a catalog title popular again!) with artistic ambitions (make the catalog title different!) and fan expectations (don’t make it too different!).   These films, more or less, do just about everything right to please all parties, but unless an audience member is experiencing the property for the first time, rarely do these films have the same “wow” factor of the original.

Total Recall roughly follows the premise of the original film by Paul Verhoeven which in turn was based short story by Philip K. Dick.  Douglass Quaid (Colin Farrell, Horrible Bosses) is a bored blue collar guy who decides to visit Rekall, a futuristic travel agency that implants memories of a trip rather than having that client actually go somewhere.  The Rekall trips can get quite exotic, and Quaid chooses to become a secret agent.  As the Rekall travel agent (John Cho, Harold & Kumar series) begins to start the memory machine, Rekall is raided by a SWAT team sent to recover Quaid, who they claim has been a secret agent all along.  There must be a dozen “is it real or not?” reversals throughout the film as Quaid tries to decipher whether he is in the Rekall machine or if what he is experiencing is actually happening.  Freedom fighters (Bill Nighy; Jessica Biel, Blade: Trinity) and a tyrant (Bryan Cranston, Detachment) both vie for Quaid's services.  Quaid, for his part, may be a double (or triple or quadruple…) agent for either side.  Regardless, he is constantly pursued by his murderous wife (Kate Beckinsale, Underworld series) who may or may not be a secret agent herself.

As mentioned above, 2012’s Total Recall is reverent to the 1990 original, throwing in visual references such as the Rekall memory machine, Quaid’s original undercover costume, and of course the three breasted woman.  There are also significant changes to the story, such as omitting Mars and moving the colonial struggle to Earth.  Paul Verhoeven’s cynical, sarcastic view of society is gone, as is Arh-nuld’s deadpan, cartoonish action.  Instead 2012's Total Recall has plenty of post-Bourne shaky-cam sequences and a stone-cold serious demenor.  Directed by Len Wiseman (Underworld series) and written by Kurt Wimmer (Salt) and Mark Bomback, 2012’s Total Recall unfortunately moves with such rapidity that viewers are unable to fully appreciate the wonderful production design.  The writers of 1990’s Total Recall, Ronald Shusett, Dan O’Bannon and Jon Povill, get a “story by” nod.

On its own, 2012's Total Recall is a fine sci-fi thriller that newcomers will likely enjoy.  But for cinephiles, Total Recall’s twisty story has been done before and done better in other films, including the original.  For the record, it’s been done way, way worse too.  Perhaps it’s unfair to judge this new film based on the merits of the old one, but it somehow seems fitting to do so for a remake of an adaptation whose main premise is to explore the nature of memories.