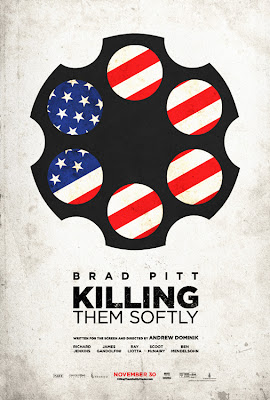 The "Gangster Film" has often been used as a metaphor for capitalism and life in the American sphere. The Godfather films are a secession story among powerful Americans, whose profession just happens to be crime. What is Scarface’s Tony Montana but a twisted, amoral version of the American dream? Montana even kills a communist sympathizer for a (forged) green card. Frank Lucas of American Gangster is portrayed as something of a globalist pioneer, importing his (illicit) goods from Asia to sell in the USA. In this grand tradition of gangster film-as-capitalism metaphor enters Killing Them Softly. Killing Them Softly, however, boasts this metaphor so loudly and so obviously, it makes the rise and fall of Tony Montana look subtle by comparison. Yes, 1983's Scarface, one of cinema's most excessively over-the-top films, handles its themes with more nuance than this one.

The plot of Killing Them Softly revolves around two small time hoods, Frankie (Scoot McNairy) and Russell (Ben Mendelsohn), who rob a major card game patronized by other, bigger criminals.  It’s the perfect crime they figure, since they have the perfect patsy – the guy who robbed the games last time.  Markie (Ray Liotta) got away with the last robbery on good will (and a beating), but the gangsters won’t take kindly to being hoodwinked a second time. "Fool me once," as the saying goes. After the gangster games are indeed robbed for a second time, Jackie Cogan (Brad Pitt) is hired to track down and kill the perpetrators.  Cogan is presumably the film's protagonist, though the story bounces around between him, Frankie and Russel, and an assortment of other rouges.  The film is largely propelled forward by dialog, which the occasional, violent action scene serving as punctuation.  In fact, the film seems like it could be retrofitted into a stage play, with little work on the screenplay.

As the story progresses, it’s obvious that the gangsters are supposed to parallel the backstabbing world of politics and Wall Street, particularly the Economic Crash of 2008 which serves, along with the 2008 US Elections, as a backdrop for this film.  In fact, these are probably the most politically-savvy gangsters ever committed to celluloid.  Whether at a card game, heading out on a hit or coming home from a late-night bender, the wise guys of Killing Them Softly are nearly always tuned into NPR or C-SPAN. Now, having gangsters rob their own casino as a metaphor for Wall Streeters during the 2008 Crash?  Brilliant. That’s only the first act. Having the same gangsters-cum-Wall Street stand-ins spend the rest of the film backstabbing one another during the fallout? Perhaps brilliant too. Having the gangsters watch political TV and talk about US Politics, when not out doing crime?  It all starts to become overbearing. There are also a handful of dialog scenes that go on for a little too long, further making the film less fun/interesting/cool than it might have been.

Killing Them Softly is an intriguing, low-key thriller with a timely allegory.  But for all of Killing Them Softly’s strengths as character study or social commentary, it could have used a dose of subtly.  It's rare for a film to be this smart and challenging while also being so obvious in what it wants to say. Fans of gangster fiction, political allegory or low-key talkers would do well to give Killing Them Softly a try.  I liked it, for what it's worth, though your mileage may very.

Killing Them Softly was written and directed by Andrew Dominik based on the book Cogan's Trade by George V. Higgins.  Richard Jenkins (The Cabin in the Woods) and James Gandolfini (The Sopranos, further rounding out the film's gangster cred) also star.