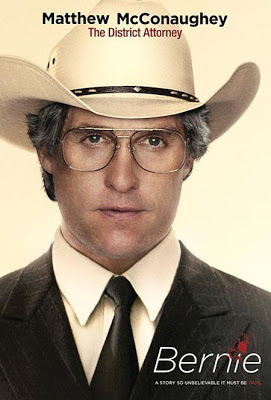 Bernie? He's a well liked guy in the small town of Carthage, Texas. He's a mortician who goes the extra mile to make sure the departed always look their best and that the survivors feel cared for. Bernie especially looks after elderly widows. One particular little old lady, the widow of the richest man in town, catches his eye. The richest man’s widow, Marjorie, just happens to be the least liked person in town. Marjorie and Bernie develop an unlikely and strange relationship. Bernie looks after her and she provides Bernie with trips and other trappings of wealth. Is it a romantic relationship? Maybe. Is Bernie a grifter? Maybe that too, but he rarely spends her money on himself, instead using it toward community development. Since Bernie is the only one who can stand to be around Marjorie, he is the prime suspect when she goes missing.

There isn't a lot to say about Bernie’s plot because it’s a surprisingly simple film. The trailer gives away more than even the above plot description. There are no twists, nor are there third act revelations. Instead, the film is constructed as a mockumentary, with some two dozen townfolks talking to the camera during faux interviews. The film emulates the slow-paced, gossip filled denizens of small town America, and in some ways “they” (as a whole) are as much the subject of the film as the title character. Bernie blurs fact and fiction, since the film is based on the "true story" of a man of the same name, and some Carthage locals essentially portray themselves. Director Richard Linklater walks a fine line between mocking these small town eccentrics and celebrating them. The film is often amusing and frequently witty though it never rises to laugh out loud funny. Jack Black is pitch-perfect as Bernie who is both a jovial small town guy and a colorful lover of musicals. The scene stealer, however, is the showboating District Attorney played by Matthew McConaughey, who continues to make the shift from leading man to character actor.

Bernie was directed by Richard Linklater, and this low-budget, small town Texas film fits into his canon despite not necessarily being his best. Linklater co-writes the screenplay with Skip Hollandsworth. Hollondsworth wrote the original 1998 article “Midnight in the Garden of East Texas” that detailed the tale of Bernie Tiede.

Clever and watchable, Bernie is a fine, if minor release from small town Texas' poet laureate.