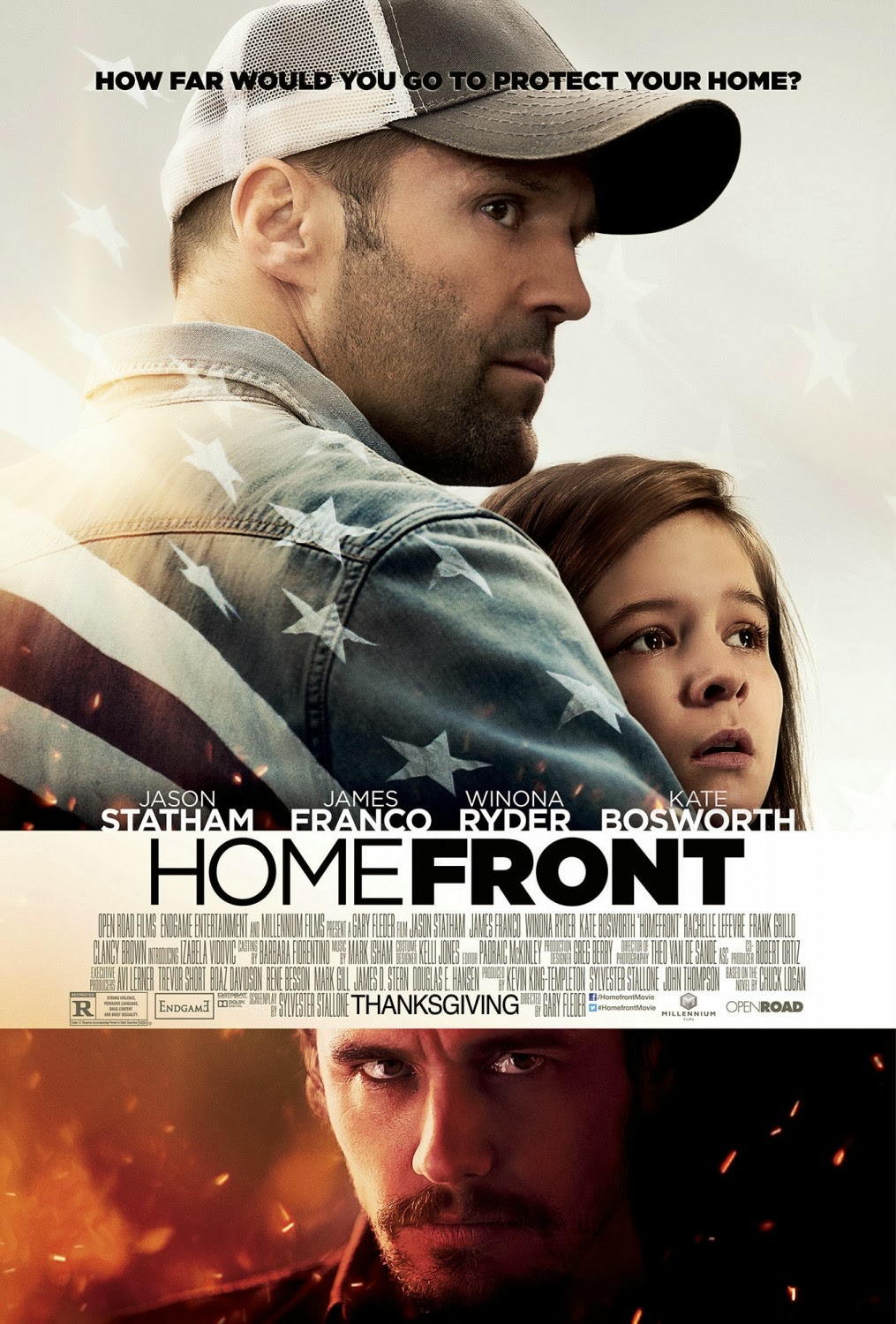 Not to be confused with Showtime's Homeland or the video game Homefront, the 2013 film Homefront is based on the novel of the same name by Chuck Logan.

In the film, Interpol agent Phil Broker (Jason Statham) goes into hiding after a raid on a meth dealing biker game goes awry. Retiring as an agent for good, Broker is happy to live out his days and raise his daughter in Podunk, Louisiana. Unfortunately, his unfamiliar "big city" ways quickly earn the ire of some of the locals, including meth lord "Gator" Bodine (James Franco). Gator eventually uncovers Broker's past, and the film culminates, as one might expect, in a showdown between Broker, Gator and a gang full of vengeful bikers.

Though it seemingly recycles home invasion themes from Straw Dogs and plot points from A History of Violence, Homeland is an unconventional action thriller in its own way. James Franco is an off-key choice for a villain, and the film features a far more detailed plot than most genre action films get. In fact, most of the second act is spent simply setting up the final showdown. A half dozen characters get solo screentime, including a junkie (Winona Ryder), biker bosses (Chuck Zito, Frank Grillo), a strung out local (Kate Bosworth) and a sheriff who may or may not be on the take (Clancy Brown). So many subplots and set ups might have been an appropriate choice for a TV series or have worked in the original novel, but it isn't an effective use of screen time here. One character (played by Omar Benson Miller) even appears every 20 minutes dispense exposition. It's a shame since themes of blood fueds, family ties and the right to defend one's home all take a backseat to the chessboard that is the film's plot. Even the film's promise of showing a good old fashioned, flag waiving "American Butt Kicking" is subdued thanks to the choice to cast Statham, an Englishman.


The screenplay is written by Sylvester Stallone, and with some tweaks, it could have been a starring vehicle for him in his prime. He simply would not have given so much screen time to supporting characters were it his film, and it's a choice that, as mentioned above, bogs down the film's middle act. Homefront was directed by Gary Felder.

Dispite it's flaws, Homefront is entertaining enough that action junkies and Statham fans will get some mileage out of it. Unfortunately, there isn't enough here to differentiate it from superior films such as Straw Dogs or A History of Violence.