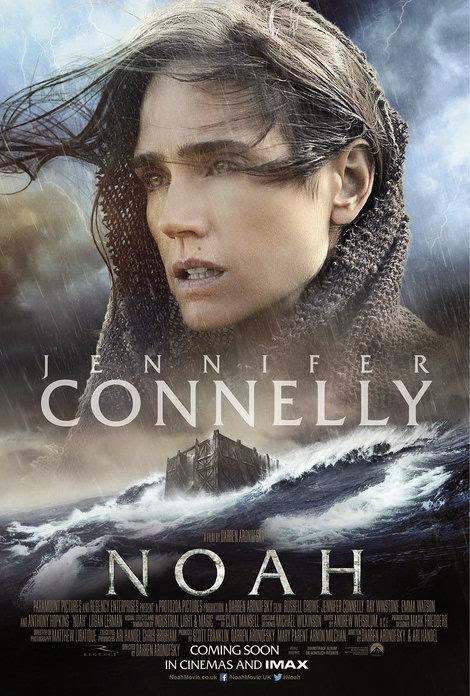 Though it may sound offensive to religious folks on face value, but there is a reason that Charlton Heston effortlessly moved from big budget biblical epics to b-movie sci-fi fare. That’s because, at its core, making a sci-fi film and biblical epic require the same basic filmmaking toolset. Far off lands, strange languages, colorful costumes and often, but not always, a morality play at the center of the story.

In this current era of big spectacle films, it’s actually more striking that biblical epics haven't made a comeback sooner.

Noah is is the first biblical epic of 2014, and arguably the biggest religious film since The Passion of the Christ. It’s nearly as insane as it’s title character may (or may not) be. Noah is in turns epic, intimate, corny, profound, deadly serious and laughable.

The basic beats from the well known Sunday school story are intact. The world has been overrun with evil, and God, displeased with mankind's’ actions, decides to flood the world in order to start over. First and foremost, God wishes to spare the animals, with a male and female pairs of each kind to be tucked away on a floating sanctuary. Whether man is to be spared from the flood, at least in this retelling, is to be determined.

Certainly new to the story of Noah, or at least to this reviewer, is the presence of rock monsters, Lord of the Rings-style battle sequences and infanticide. Among all the additions to the story, there has been considerable chatter over whether or not Noah was a vegetarian. Maybe, but this addendum at least makes sense thematically. Why send someone to save the animals if he is going to get the hankering for a steak halfway though the trip? The general themes of the Bible conflate with the filmmaker’s anti-pollution agenda leading to a thematic tug of war around anti-industrialization. Is pollution from smelting, as abusive as it may be to God’s Earth, really on the same moral ground as rape and murder? They certainly can’t be said to be a causality as this film subtly implies.

The most evocative moments of the film come in the antediluvian period of the film. How strange it must have been to have no knowledge of the rules of the universe. Even the night sky has different constellations than we currently know. In this time, anything out of the ordinary could be taken as a message from God, and the film even begins to raise the question of whether or not Noah (Russell Crowe) has lost his mind. His idea for the ark comes on a Biblical equivalent of an LSD trip, courtesy of his grandfather Methuselah (Anthony Hopkins, chewing slightly less scenery than in other recent films). There is also a heart wrenching subplot about Noah’s family being torn apart by his mission from God. No $100 Million film, at least one with an overtly Biblical theme, is going to go all the way down either dark road.

Director Darren Aronofsky hasn't lost his flair for montage imagery, and in some ways, the time lapse segments depicting Creation and of a river meandering are as thought provoking as any of the actors’ monologs.

Entertaining? Reverent? Blasphemous? Cringe worthy and over-the-top? Noah is all of these things. Rarely at the same time. It’s a “sum of its parts” film, that works better than it probably should.