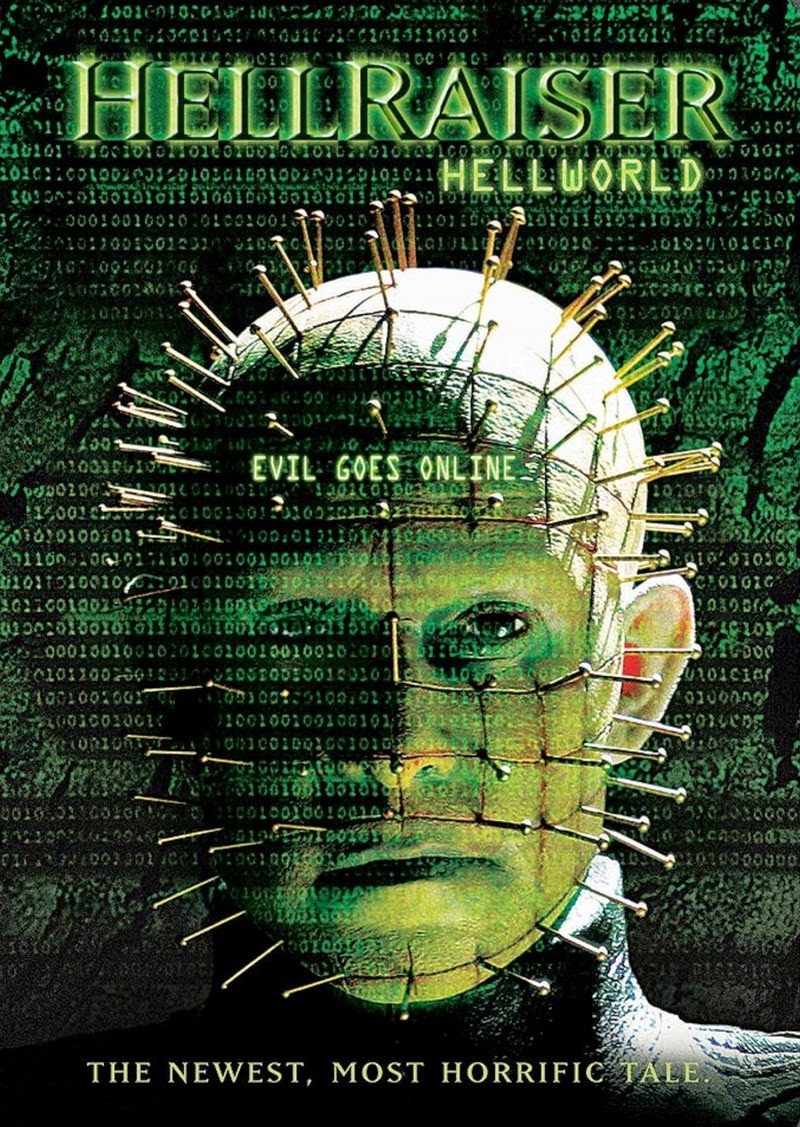 Hellraiser: Hellworld finds notorious film baddie Pinhead stalking teens on the internet in his eighth (!) movie adventure. For the uninitiated, Pinhead is a leader of a group of monsters known as the Cenobites who hail from another dimension. The Cenobites are summoned by a puzzle cube, and when the puzzle cube is solved the Cenobites appear to unleash various forms of torture.

Opening during a funeral, Hellraiser: Hellworld follows a group of teenage video gamers as they mourn their friend’s untimely passing. They’re a hip and stylish group, or at least the closest facsimile that film executives could conjure. Picking up two years after the funeral, the gamers still play Hellworld, an online game based on the Cenobite mythology. Chelsea (Katheryn Winnick), Jake (Christopher Jacot) and Mike (Henry Cavill making an early screen appearance) all have enough skills in the game to win invites to a mysterious Hellworld party. Hosted by an eccentric collector of Cenobite relics (horror mainstay Lance Henriksen), the gamers quickly realize something is awry at the party. Everyone seems to be seeing visions of the real Cenobites, and it isn’t long before guest start disappearing. It’s fairly standard haunted house fare, filled with jump scares, spooky rooms and a mystery to be solved involving their deceased friend.

Hellraiser: Hellworld recalls the Scream franchise in its self-awareness. The gamers consume memorabilia of the franchise they are starring in, and they are aware of the “rules” of the universe (i.e. don’t open the puzzle box). The ending features a (fairly) clever twist that fits into the metanarrative. Though it was released in 2006, a cursory glance at the end credits shows a copyright of 2003. Either way, the film is technically “post 9-11” by date, yet recalls a simpler era when the most serious problems facing society were rock music, violent video games and… horror movies. Now even mainstream PG-13 movies targeting all four quadrants feature storylines with ecological destruction, crumbling infrastructure, social decay and various abuses of power by those in authority. The lack of pretentiousness is actually quite refreshing. Sent straight to DVD, Hellraiser: Hellword knows it’s basically a cheap schlock film and doesn't try to do much more than deliver on its slasher promise. Though having a cursory knowledge of the Hellraiser franchise will help viewers to some extent, the film doesn’t rely on the complex mythology or deepen it. In fact, the original story was completely unrelated to the series before the Pinhead mythos was shoehorned onto it.

Though it won’t win any awards for style, originality, innovation, acting or directing, Hellraiser: Hellworld fulfills its modest promise. It’s just engaging enough to hold the viewers’ attention for an hour and a half runtime, but not so amazing that it needs to be sought. Fans of the Hellraiser series and late-night insomniacs will get the most out of this entry. It’s just a run-of-the-mill “good” horror film.

Doug Bradley reprises his role as Pinhead, a character he has played since the original. Rick Bota directs this entry, his third of the series. The original story was written by Joel Soisson, and the screenplay was written by Carl V. Dupré.
© 2014 Justin Rumenapp
film reviews Hellraiser: Hellworld Henry Cavill horror film Lance Henriksen movie reviews