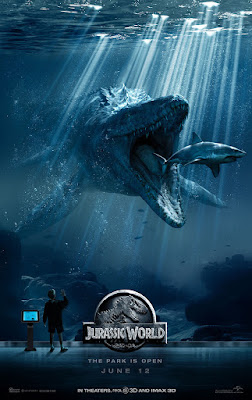 The first Jurassic Park film was criticized for being an overtly toyetic affair, designed solely to sell toys to kids. Though selling merchandise may have been a secondary concern to that film's director, Steven Spielberg, the Jurassic Park logo and available-in-real-life goodies certainly were splashed everywhere in that film.

Some twenty-odd years later, the third sequel to Jurassic Park - titled Jurassic World this time out - seems to know it is a cash-in and frequently points this fact out. One character, a Jurassic World park technician played by Jake Johnson, even wears an original Jurassic Park t-shirt. He, and other characters, extol the awesome qualities of the original park, comments which also serve as a tribute to the original film. Several sequences in the film are subsequently shown and are designed solely to evoke memories of said original park/film, including prairies full of dinosaurs.

In this film, the newly titled Jurassic World is fully open for business and ready for mass-market appeal. Thousands of guests visit daily, and the park is filled with rides, lines and profit for shareholders. The park administrators seemingly have wised up since the last three dinosaur-related incidents and packed the park with herbivores. The head park administrator Claire, played by Bryce Dallas Howard, notes to the park's owners that the crowds are getting bored and want something newer, fresher and scarier. Enter Dr. Henry Wu, played by BD Wong the only actor to return from the original film. Dr. Wu is back in the lab cooking up new dino DNA and is happy to abide the demands.

The film vaguely criticizes this design-by-committee corporate control over the park, and as it might be expected, the demand for more scary dinosaurs leads to the park's downfall and lots of people being eaten. This angle might have worked if Jurassic World itself wasn't designed-by-committee itself. Much of the film is spent remixing the iconic sequences from the original, in a "newer, fresher and scarier" way. Are the countless chain restaurants and boutiques in Jurassic World meant to be taken as a parody of consumer culture or are they a symptom of it? One wonders what a gifted satirist might have done with this material. I longed for the film to cut to the Universal Studios backlot with an executive talking talking into the camera stating, "this movie sucks" before breaking into a dance number with the main cast, CGI raptors and Gizmo from Gremlins.

Though the film is a largely bland, CGI-by-numbers affair, Jurassic World also has a surprising disregard for human life, made all the more disgusting when a pair of leads stop to shed a single tear over half-eaten brontosauruses. The film is especially cruel toward an errant babysitter who is chewed on for an expended period of time, presumably as punishment for losing those in her charge.

The final sequences of the film, including them much mocked "raptor biker gang" scene from the trailer, are much better staged than most elements of the first two acts. By this point, however, it's too late for the film to be anything more than a screen filled with empty spectacle.

I would be remiss if I were to fail to mention that nearly every single character acts in the most irrational, senseless ways. Why do the characters do stupid things? Well, not only are they poorly written and flat as a sheet of paper, if they didn't behave in the most idiotically, dinosaurs wouldn't escape and there wouldn't be a movie. Chris Pratt's dinosaur training character, an Indiana Jones wannabe named Owen, seems to know about the "terrible lizards," but for some reason he is marginalized in the park's hierarchy. No other employee of Jurassic World seems to know anything about dinosaurs or their behavior, seemingly something that would be a "preferred quality" requirement on Jurassic World's job postings. I cannot understate just how stupid these people are. They are so dumb, I doubt the majority of them could pass an open book GED test.