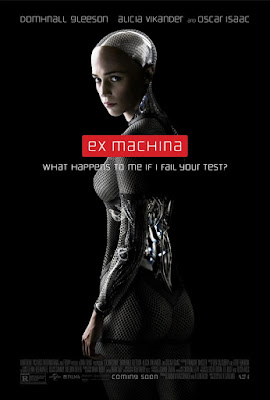 Ex Machina is an interesting film that isn't much more interesting than that description. Though it is a stylish and intelligent affair, it doesn't add anything new to the cannon of robot films.

Programmer Caleb (Domhnall Gleeson) is whisked off to enigmatic software billionaire Nathan Bateman's research compound after winning a contest. He's a sort of high tech Willy Wonka. Nathan (Oscar Isaac) owns the world's largest search engine in Ex Machina's universe, and he is ready to show Caleb his newest product. Though the product might be a spoiler in other movies, the advertising would correctly lead potential audience members to conclude that is indeed a fully functioning android.

Ava is the android's name, and after some signing some nondisclosure agreements, Caleb is ready to run some tests on Ava with Nathan. Specifically, the men would like to run a "Turing test" where robots' behavior is evaluated. If a robot exhibits behavior similar to that of a human, the robot is said to have passed the test. Large sections of the film are spent with Caleb interviewing Ava part of this test, and each of his encounters with her are given a full on screen title as if the audience was watching actual lab footage. The film's biggest special effect, and I suspect most of it's modest budget, went toward the Ava robot. While she is played by actress Alicia Vikander, Ava also has various translucent sections with all the standard robotic accouterments visible. Vikander does not use jerky pantomimes as traditional robots do, but rather moves with smooth and deliberate motions.

As expected, both Nathan and his robotic program have secrets that are hidden from Caleb and the audience. These secrets, unfortunately, aren't really that surprising to anyone who as seen a thriller at one point during his or her life. While it updates age old questions about what dominion man should have over his creations, it doesn't have the thematic or stylistic heft to elevate it to a masterwork. There is some brief nods to the sexism of the two bro-grammers running the tests, Ava is designed to be the 'ideal woman,' though the film never examines this theme in detail as the story as Ava never becomes a primary character.

While Ex Machina is an intelligent film that doesn't rely on special effects or violence to make a point about human - computer interactions, it doesn't make any new points either. Though it's more realistic and scientifically rigorous than Blade Runner, Ex Machina basically makes the same point.

British writer-director Alex Garland has become one of the preeminent sci-fi auteurs in English language cinema. He's penned the great 28 Days Later, the fantastic Dredd reboot and the so-so Sunshine. He's hoping his next film is a classic.