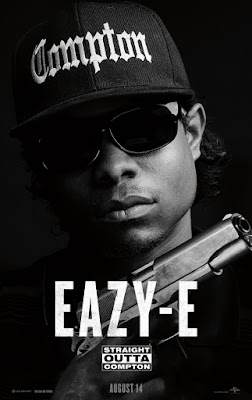 The biopic detailing the rise and fall of "America's Most Dangerous Group" hits the big screen some 25 years after they exploded into American consciousness. NWA, an acronym for an unprintable phrase, changed popular culture by pioneering what is now known as Gangsta Rap.

The film depicts about how five acquaintances from Compton, CA come together to form the group. Ice Cube wrote the lyrics; Dr. Dre and DJ Yella made the beats; MC Ren complemented Cube's angry lyrics with a hardcore delivery; and Eazy-E added legitimate street flair as the member who was the most connected to the streets. When they get together, they produce a record that blows up on the streets and on local radio. Eazy-E, the unofficial business leader of the group, can only take the them so far, however. Enter, Jerry Heller. Heller managed popular artists in decades prior, but hasn't had a hit in a while at the time of the film. As much as Heller needs NWA to bring him back to prominence, the black rap group needs him to open the doors to white society. Mainly, they need him to get record distribution with white record companies, and deal with the police. The LAPD in particular harass the members of the group though out the film.

Director F. Gary Gray keeps 10 years of story interesting though an ever moving camera, and spot on production design. It's really quite a gorgeous looking film. Gray adds many layers of subtleties in the film, from gang affiliations to Heller making NWA "legit" in the white business world. Heller and Eazy have a uniquely complex relationship, that is both exploitative and familial. The high energy music of NWA adds significant value to proceedings, and it's great fun to hear their anti-authoritarian hits on high power theater sound systems. The groups anti-police brutality anthems in particular have come back to relevance as a result of several high profile brutality cases.

The film unfortunately leaves the group's very real sexim unremarked upon. A few songs released by NWA and its solo members are reprehensible, and a few others are basically audio pornography. One can certainly defend their right to release this music, but it's harder to support some of the lyrics themselves. Likewise, there is a thin line between depicting the streets and glorifying them, and NWA stomped back and forth across that line with glee. Cease and desist letters from the FBI not only offered the opportunity to defend free speech, but also to market their albums. A more critical eye toward it's subjects may have led to a stronger 3rd act as well. Once the key members of the group all establish successful solo careers, the film loses steam. It is as if the film is unsure which thread to follow. The film devolves, literally, into a highlight reel of Dr. Dre and Ice Cube's successes. The film also attempts to portray several characters as hedonists and family men, without depicting the change of heart that might accompany such a switch.

The lead actors portray their roles with aplomb. While they are doppelgangers for their real life counterparts, they can also actually act. Ice Cube is played by O'Shea Jackson, Jr., Cube's own son; Dr. Dre is played by Corey Hawkins; Yella by Neil Brown, Jr.; MC Ren by Aldis Hodge; and Eazy-E by Jason Mitchell. All are relative newcomers to feature films, and hopefully they will appear in more films in the future. The role of Jerry Heller is inhabited by Paul Giamatti who owns this part front to back. In a bit of the circle completing itself, director Gray was behind Friday, once of Ice Cube's first movie roles.

Like NWA itself, Straight Outta Compton has phenomenal performances, yet is impossible to support unequivocally. It leads audiences to a better understanding of the groups rise and fall, but it lacks a more analytical approach to its leads. As much as the group tapped into a a simmering rage that existed in black communities plagued by crime at the hands of both gangsters and corrupt police, NWA were also self-consciously exploitative, and their hardcore misogyny can't be brushed over. Just like their albums, music fans won't want to miss this. Viewers need to grapple with the very real issue raised by what is in - and left out of - this film.