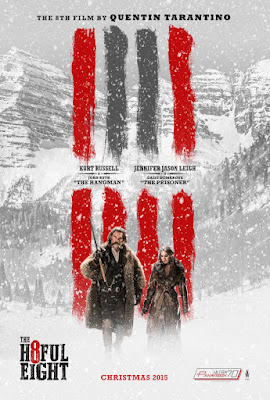 The Hateful Eight delivers on its promise of depicting the meanest, nastiest sons of bitches West of the Mississippi. The premise of the film is simple: the titular eight hole up in a mountainside lodge to wait out a hellacious snowstorm. One of the eight is a prisoner being transported to a nearby city. Another of the eight is intent on killing all the others to free the prisoner. Racial epithets and bullets fly. The film is basically a hyperviolent version of the board game Clue. Who is going to kill whom with the noose by the fireplace?

Though the film hosts a fantastic ensemble of actors, the real star of the show is writer-director Quentin Tarantino. All of QT's strengths - and weaknesses - are on display. Among his strengths is his knack for casting. Kurt Russell was made for westerns an excels here as a bounty hunter. Along with Samuel L. Jackson's gunslinger, the two serve as the film's moral compass. The compass is broken into 1000 pieces of course, but the two are the closest to "straight men" the hateful bunch has. Jennifer Jason Leigh's prisoner is used as a human punching bag, and despite getting few lines, her physical performance is amazing. She can mock Russell with nothing more than a glance. Seemingly flamboyant choices by Tim Roth and bizarre choices by Bruce Dern actually become very clever once revelations are made late in the film. Tarantino favorite Ennio Morricone composes a wonderful, terrifying score for the film. Tarantino’s great skill isn’t that he picks and chooses elements from older films to remix. It’s that he can create compelling, cinematic sequences out of dialog and music. The Hateful Eight, with very few changes, could be performed as a stage show. While the 70MM sequences in the mountains were breathtaking, the majority of the film takes place inside a stagecoach or inside the lodge. The dialog is top notch and engrossing, a special treat given that characters yak for the majority of the run-time.

To detail the violence in the film would be tedious and likely constitute a “spoiler.” Like criticizing the Jackass crew for doing dumb stunts criticizing the violent elements of this film is more than likely to encourage “the 9th film from Quentin Tarantino” to go even more over the top. While this reviewer is far from a moral crusader, particularly when violence is placed in historical context, some reviewers have correctly pointed out that this film lingers on pain in a way that is… distasteful. The violence isn't exciting, and it doesn't seem to moralize massacres. I’d be the first to defend the film’s violence if it served a point. Despite the appearance of a larger than life crucifix outside the lodge, there is no redemption here. Only suffering. Tarantino's weakness has always been his inability to rein in his baser elements. Had he been able to temper his predilections, this would likely join the short list of 2000-era Western classics.

Much is made of how this is Tarantino's "political film." Samuel L. Jackson's character certainly describes how difficult it is for a Black person to fit in a White society. Questions about stand your ground laws and the festering racism of former Confederates, however, are of a tertiary concern to making sure everyone in the film gets killed real good. Justice and racial unity means everyone gets to be a rotten basterd and everyone can die at any minute for any reason. Furthermore, this film is far more obsessed with Samuel L. Jackson's manhood than any film written and directed by a white, heterosexual male should be. It's borders on fetishization. Repeated use of a particular racial epithet got far too many laffs in the majority White screening I attended for any racial observations to stick.

Overall, The Hateful Eight is a western with the impact of a "video nasty." The schlock and shock value of some of the violence holds it back from true greatness, though fans of Tarantino and exploitation films will find much to love.