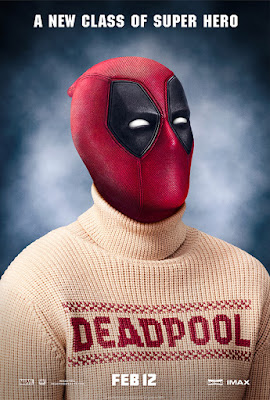 It's been noted before, Ryan Reynolds is a curious movie star. He's had several would-be comic book franchises, including Blade and Green Lantern. This film actually marks his second outing as Deadpool His first was in 2009's X-Men Origins: Wolverine. Deadpool's story line in the new 2016 film is totally rebooted from that appearance. Deadpool just might be the superhero that sticks for him.

Born Wade Wilson, Deadpool is disgraced ex-military man who now works as an a private enforcer and mercenary. He spends most of his time in New York City, taking odd jobs where he can. He's got a motor mouth, spitting pure stream of consciousness. As it turns out, his eccentricities may not just be personality quirks. He has brain cancer and undergoes experimental "mutant therapy" to cure it. His motivation: his love affair with a "woman of the evening" named Vanessa played by Morena Baccarin. Despite their unconventional romance, it's actually quite effecting. They are both sleazebags and it works in their own sleaze bag way.

Deadpool has long been a fan favorite for his self-parody and hyper-violence. This film brings both to an R-rated adaptation. There are beheadings, blue humor and naked breasts along the way. This is decidedly not a family film, needless to say. It has far more in common with the Kick-Ass franchise than The Avengers. As for the film's continuity with the other X-Men movies? As Deadpool himself says, who can keep the timelines straight, anyhow? X-people Colossus and Negasonic Teenage Warhead also star, played by Stefan Kapičić and Brianna Hildebrand respectively.

Deadpool was directed by Tim Miller, his first feature film. Miller formerly worked on video games such as Mass Effect 2 and movie title sequences, including those for The Girl with the Dragon Tattoo and Thor: Dark World. The proceedings are clever, though they keep one one foot firmly in the superhero world. Deadpool begins a fight at the beginning of the film and proceeds to narrate his story via flashback, with occasional jumps to "now" to continue the action. It has it's tongue in cheek and make pop-culture references de jour. It's funny, in a decidedly low-brow way. Jokes about Star Wars and Lord of the Rings are witty though they might have hit better as "insider humor" 10 years ago. Nerd culture really is just general culture today  One almost wishes it went for broke in a Gremlins 2 insane kind of way.

Deadpool is sarcastic, violent and decidedly not politically correct. It has some fun with the superhero mold, though it certainly doesn't break it. Adult comics fans who can stomach the content will enjoy their time, though the film is by no means ground breaking. Hopefully, families hooked on The Avengers steer clear.