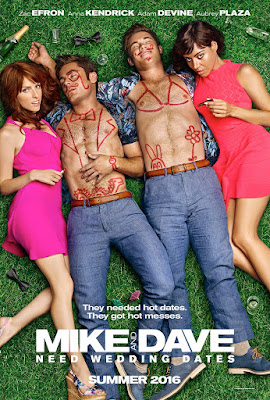 Based on the so bizarre it must be true story of Mike and Dave Stangle, Mike and Dave need wedding dates follows the titular duo as they attempt to find "nice girls" for their sister's wedding. Mike, played by Adam DeVine, and Dave, played by Zac Efron, are wild goofballs who make a scene at every party they attend. As such, their sister Jeanie, portrayed by Stephanie Beard, mandates that they bring respectable dates to her Hawaiian destination wedding. Her reasoning being that the women will keep Mike and date in line and keep them from occupied from distracting too many other guests.

Being clueless guys that they are, Mike and Dave post a wild Craigslist posting that goes viral. With the promise of a free trip to the islands, every scammer on the block arrives at Mike and Dave's doorstep with the promise of true love. Enter Tatiana and Ashley, Aubrey Plaza and Anna Kendrick respectively, two women who are just as wild has Mike and Dave. All four have to pretend to be on their best behavior for the wedding to go off without a hitch. Naturally, that doesn't happen. Fireworks, ATV jumps, a horse stampede and plenty of alcohol are involved.

Despite being based on a true story, there doesn't seem to be much reality in Mike and Dave. Although there are some nods toward a film with more pathos, the movie largely plays as an extended comedy sketch. The four leads are more caricatures, than live twenty-somethings. It would be against their characters' natures to truly grow up in a 90 minute film, though the movie might have gained strength by mining their inner lives a little more. Needless to say, the family must be fabulously wealthy to spring for a trip to Hawaii for two complete strangers.

To be sure, there are plenty of laughs to be found in the film, though few stay with the audience after the end credits. If the characters seem like sketches, the film seems edited to maximize this effect. It races from gag to gag, rather than letting the plot develop organically.

Mike and Dave need wedding dates is a likable and funny though unessential comedy film. It's nice to see a mid-budget film with nothing on its mind but laughs, though the laughs could have been much deeper - especially given the cast of top notch talent. It's either a near miss or a small hit, depending on your point of view.