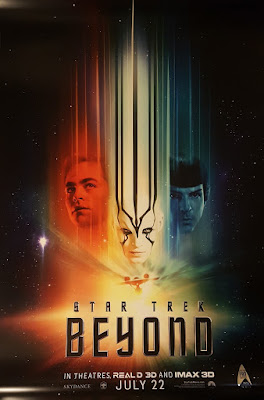 The crew of the starship Enterprise is back for their 3rd adventure in the new, rebooted Star Trek universe. This expedition finds Captain Kirk, Spock and the rest of the gang stranded on an uncharted planet with no way to call starfleet. Not only are these iconic characters battling the forces of the unknown, the screenplay seems to be battling to find a balance between character moments and bombastic pyrotechnics.

The Enterprise crew finds itself on this uncharted planet thanks to an alien who arrives on a space station requesting help finding her starship and team in a nearby nebula. Naturally, Kirk is the first to volunteer. Shortly after arriving (as in immediately), the Enterprise discovers an anomaly and crash lands on this uncharted world. With their escape pods flung to far edges of the planet, the crew must reunite and find the alien's team. . In true Star Trek fashion, there is a villain hiding out on this world causing all of the chaos which Kirk and Co. must defeat. By sheer coincidence, and a little bad screenwriting, the Enterprise just so happens to be holding a mysterious artifact this villain is looking for.

The majority of the film's runtime is spent on a MacGuffin chase after this artifact, with all of the leads hunting it down for their far flung corners. Unfortunately, some of the action sequences in the first half of the film are so generic that the filmmakers could have plugged in any science fiction character from Buzz Lightyear to Mace Griffin and the scenes would have played exactly the same. They have no emotional heft. The motivations for the villain aren't revealed until late in the film, which is a shame because he is an incredibly Star Trek-y character who could have added to emotional depth in the film. Both Spock and Kirk spend a little time (between huge explosions) deciding what type of people they want to be, and the villain could have been a great counterpoint.

The characters are timeless, and the film's stand out sequences all involve them, not the effects. The producers gathered a great ensemble of actors for the 2009 film, including Chris Pine and Capt. Kirk, Zachary Quinto as Spock, Simon Pegg as Scotty, Zoe Saldana as Uhura and this reviewer's personal favorite Karl Urban as Bones. Idris Elba joins as the villain, and Sofia Boutella joins as alien warrior Jaylah. The actors, Chris Pine in particular, now have a few miles on them, and their characters aren't quite the hotshot youngsters they used to be. As the actors gain more prominence and skill, it only continues to add gravitas to their characters in the Star Trek films.

Justin Lin directs Star Trek Beyond and brings the experience from three Fast and Furious films. The final battle is fantastic, though again, some of the first half of the film is generic. The screenplay is penned by nerd-icon Simon Pegg along with Doug Jung. The cerebral Pegg paired with Lin's action instincts likely points to the film's yin-yang between character and action.

Star Trek Beyond is a mixed bag, filled with fun, exploration and the optimistic view of future that Star Trek is known. The character moments are great. Hopefully Star Trek 4: Preposition adds a few more moments of introspection and even wonder at the majesties of the galaxy.