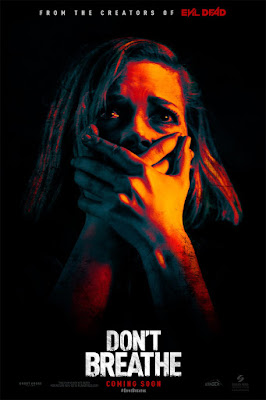 An abandoned neighborhood. After dark. Three young miscreants are staking out a decrepit house that supposedly holds a cache of cash. The lights are out. No one's home right??

This is exactly the scenario that plays out in Don't Breathe, the latest horror-thriller from Sam Raimi acolyte Fede Alvarez. Like many horror-thrillers, this film follows a handful of teens and twentysomethings as they navigate an outlandish scenario. Rocky, played by Jane Levy, needs to score the money so she can escape her toxic family life. Daniel Zovatto plays Money, Rocky's wannabe street hustler boyfriend. And Alex, played by Dylan Minnette, tags along because he's the "also ran" vying for Rocky's heart. Alex's spot in the crew is secured thanks to the fact that his dad operates a security company, giving the group the scoop on all the best spots to rob in Detroit. It's certainly curious that a house in an abandoned neighborhood would have an alarm system, the big payday helps assuage any second thoughts the crew might have. As it turns out, Stephen Lang plays a man with a vested interest of keeping his hands on the money.

The scenario has been done before, of course. Don't Breathe evokes other home invasion films like Panic Room and Wait Until Dark. What the film lacks in originality of scenario, it make up for in pure filmmaking prowess in its execution. Frames are loaded with visual and sonic cues that try to play on the audiences every emotion. The film takes place over the course of one evening, so scenes unfold in a facsimile to real time as the kids step on creaky floor boards and have to hold their breath to avoid detection as they enter and subsequently attempt to escape the house. Silence is perhaps the best used sound effect here. Hence the title. The entire film exists in a kind of nightmare logic where the dreamer drops the hammer just as the angry attack dog reaches him. Stephen Lang's villain isn't quite Buffalo Bill and he isn't Tony Montana either. There is a scene toward the middle of the film with Mr. Lang that will have Freudian film scholars in a frenzy for years to come.

Director Fede Alvarez previously remade Sam Raimi's Evil Dead, and he continues his association with the famed Michigan director for Don't Breathe, his second feature. Alvarez co-wrote this film with Fede Alvarez. The duo milks every ounce of dread possible out its small cast and single location. Set design, clever camera movements and atmospheric lighting keeps the film interesting. Perhaps there could be a complaint made that Detroit is a much more multicultural city than Don't Breathe's monochrome cast, but all of the leads certainly give fine performances.

Alfred Hitchcock once said that tension is created when two characters are eating at a table while unbeknownst to them, a bomb is underneath ready to explode. The majority of the run time of Don't Breathe is that bomb waiting to go off. To give a genre film like this a nod to "The Master" is perhaps the highest praise it can get.