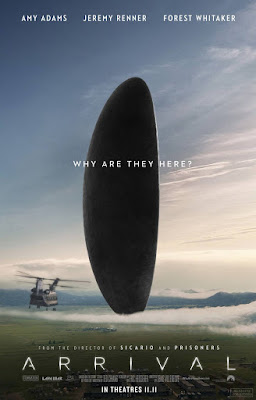 Audiences have seen this scenario before. Mysterious alien ships arrive on Earth. Humans have no idea what the aliens want. Carnage ensues. But in the simply titled Arrival, something different happens. Instead of dazzling viewers with the latest in CGI city destruction technology, Arrival seeks to inspire them with the awe that one gets while looking into the stars.

While in-movie news stations report on riots and food shortages, linguist Louise Banks, played by Amy Adams, seems somewhat nonplussed about the situation. She's recovering from the death of her teenage daughter, and somehow aliens seem insignificant compared to the loss of a child. She hugs a large pillow as she sleeps. It seems "Mr. Banks" is out of picture, too.

Shortly after the 12 alien ships arrive on earth, US Army Colonel Weber, portrayed by Forest Whitaker visits Louise in her university office. She still has security clearance from translating a few terrorist videos for Col. Weber, and he needs her help once again. The aliens have sent symbols to each country they have landed, and no one can translate them. Jeremy Renner joins the team as a scientists, and Michael SS as a CIA agent visiting the alien ship in Montana. Time isn't on their side, as they need to decode the alien message before other nations do and potentially start a war with the extraterrestrials.

Director Denis Villeneuve made waves with his 2015 film Sicario, and here his visual sensibilities serve the material well. The aliens are truly otherworldly, and their language consists of circular "ink blots" composed from mathematical patterns. The melancholy, intellectual tone sets the film apart from other similarly themed alien-invasion films. The theory of Sapir–Whorf hypothesis, that the mind changes as it learns different languages, is a big part of the proceedings. As Louise works through her grief, the entire way she looks at the world changes. Linguistics may not be the most intuitive plot device for a thriller, but the difference between the alien word for "tool" or "weapon" could mean the difference between galactic war and a new race of alien friends.

Arrival won't wow adrenaline hounds, but fans of thoughtful science fiction will be pleased by the film's focus on wonder. With so many space fantasy films out, Arrival returns the genre to it's purest form of exploring ideas.