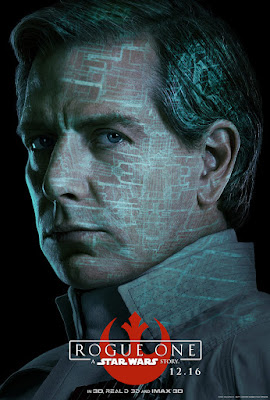 It has been a long running joke that the Star Wars movies are all made out of order. The latest entry, Rouge One, continues this trend. It has a chronological location between 1977's Star Wars IV and 2005's Star Wars III. The events of Rouge One depict how Luke, Leia and the rest of the Rebels come into possession of the blueprints for the infamous Death Star.

Rouge One boasts an ensemble cast, though Felicity Jones' Jyn is arguably the lead. After witnessing her Father being kidnapped by Imperial Officer Krennic as a child, Jyn finds that he may still be alive and developing a new weapon for the Empire some 15 years later. She's drawn into galactic intrigue, along with a rag tag group of rebels. Ben Mendolsohn stars as Krennic, along with Forest Whitaker as Saw Gerrera a rebel fighter and Mads Mikkelsen as Jyn's father.

The first third of the film is "kind of a mess," to use a technical term. There are flashbacks, flashforwards, and flashes all around. Spaceships zip and zap between a half dozen planets, and the film could have used breathing room to let the characters (and audience) contemplate the proceedings. While ensemble of Rebels Jyn joins with is a multicultural bunch, planets and characters are just thrown onto the screen with abandon. Once the story gets underway, just past the 45 minute mark so, the film becomes much more comprehensible and a lot of fun.

Gareth Edwards made mainstream waves with 2014's Godzilla reboot. Like that film, Star Wars: Rouge One makes excellent use of atmosphere and big budget visuals. Storms roll in on planet vistas, and the final showdown takes place, ironically, on a planet that looks like a spa. Rouge One is an excellent looking film that borrows many design elements from the 1977 entry updated with all the CGI gizmos of today's technology. The galaxy feels dangerous, and just a bit strange, much like watching the original film did all those years ago (the 90s for this reviewer, though possibly earlier for others).

Rouge One tells a self-contained story, something that many Star Wars films don't. It's the type of adventure that one of the better comic books or video games would have depicted. That being said, it does require knowledge of the Star Wars universe. Much like a World War II film might expect audiences to have a preexisting knowledge of the Allies and the Axis, this film requires audiences to know Rebels and the Empire, and Jedi versus the Sith. The legendary Darth Vader makes an appearance, and the film is constructed to fit perfectly into 1977's Star Wars IV.

Star Wars: Rouge One is critic-proof in a sense. Everyone is going to see it, and they know it. Fortunately, it's a fun outer space action/adventure, filled with everything people love about the other films. It is a bit dark for the younger padawans (under 10 or so), but it was great to see multiple generations enjoying the film at the screening this reviewer saw.

As a final note.... now that the Rebels have blown up a hat trick worth of Death Star type weapons over 8 movies, hopefully new a new "big bad" will be developed for future entries.