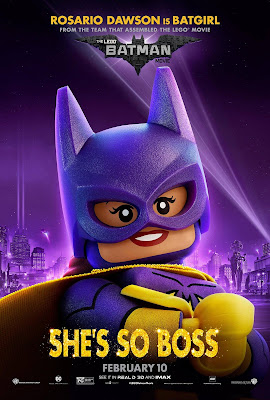 The LEGO Batman Movie is a very silly, very colorful film. It mashes together dozens of franchises with wild abandon, just like a child playing with her toys.

The storyline follows "LEGO Batman" who was first introduced in 2014's The LEGO Movie. This incarnation of Batman is narcissistic to a fault. He will save the day, but only if Gotham City praises him afterward. Everything he owns is bat-themed, and he will launch bat t-shirts into the crowd of onlookers after stopping a villain. When Barbara Gordon takes over from her father as police commissioner of the city, she devises a plan that focuses on teamwork to solve crime once and for all. This naturally goes against Batman's desire to hog all of the glory for himself, and he sets about undermining her by unleashing not only the Joker, but dozens of other baddies from the Gremlins to the Wicked Witch from The Wizard of Oz.

The LEGO Batman Movie isn't quite the surprise that the original LEGO Movie was back in 2014. Will Arnett's take on Batman is still hilarious, though like many breakout sidekick characters, he has trouble holding a film down by himself. The concept of making Batman a self-absorbed jerk is a wonderful send up of brooding superhero films. That being said, the plot of the film is basically an excuse to string together one comedy skit after another. Some skits stay a little past their expiration date, but are mostly funny nonetheless.


Now that superheroes are fully mainstream, this film also functions as the parody of the superhero craze. There are great gags and references to Batman films from years past, including the infamous shark spray. The film is family friendly, and while there are a few off-color jokes, they will mostly go over the little one's heads.

So the LEGO Batman Movie is a lot of fun, but a little flimsy as a full-length feature. One of the great things about the current generation of family entertainment is that it does have appeal to multi-generational audiences, rather than mindlessly animating something that only appears to those who haven't developed critical thinking skills. In addition to Will Arnett, the film starts Zach Galifianakis as Joker, Michael Cera as Robin and Rosario Dawson as Batgirl. Though he gets little screentime, the one and only Billy Dee Williams reprises his role as Harvey Dent.

It should also be noted that the film is a fully toyetic, post-modern creation of consumerism. That is to say, the tie-in toys are the now the stars of the show. Back in the day (i.e. the 80s and 90s), someone would go and see the movie and then buy the toys because the movie was fun. Now, people see the movie because they had the toys. And go out and buy more toys for both themselves and their children. Sure, this could be seen as cynical, consumerist cash-grab. But the movie is fun and LEGO building kits are high quality... so why not??? Now if you'll excuse me, I need to go play some legos.